The singer Beyoncé answered her own question by asking “Who runs the world? Girls!” But more than being a pop anthem, this statement runs true when it comes to discovering amazing films at TIFF as well.

Programmer Colin Geddes selected Harrison Atkins’ weird and wonderful Lace Crater to play as a part of the Vanguard program and have its world premiere in Toronto. The movie is the quintessential fit for Vanguard. It has horror and supernatural dimensions in the tale of Ruth, a bit of a loner who becomes rather intimate with a ghost. But not only does the movie spotlight a multifaceted woman, a very early supporter of the film was revealed to be Geddes’ wife, Katarina G.

We sat down with the star and director of the film, Lindsay Burdge and Harrison Atkins, in the basement of a downtown Toronto hotel, accompanied by a very prominent piece of greenery. We discovered that the feminine is very much present in the film, from the title to the colour scheme, to its very essence. We began with a discussion of a “growing up space” and went from there.

Scene Creek: Where is the growing up space?

Harrison Atkins: I grew up in this relatively affluent suburb or Dallas-Fort Worth, right in Texas. I live in New York now. People in this festival have been drawing attention to my lack of an accent.

Lindsay Burdge: You don’t have an accent.

Harrison Atkins: I know. It throws people for a loop. I’m from an especially non-regional community in Texas.

Lindsay Burdge: Maybe you just have a totally fake voice.

Harrison Atkins: When I let the animal out, my like…(incomprehensible, spoken with exaggerated accent). Lindsay and I knew each other before the film. But not super-duper well.

Lindsay Burdge: We had a conversation about a short film that I did.

Harrison Atkins: We had more than one conversation.

I’m from Pasadena, California, and then I lived in New York for a long time, which is where I met, I don’t know, everyone!

Scene Creek: So how many ruined takes were there?

Harrison Atkins: They were all ruined.

Lindsay Burdge: You mean by laughter? And sweetness?

Harrison Atkins: We were singing a lot.

Lindsay Burdge: This was definitely the singiest set I have ever been on. And jokiest. It was really funny because I’d be doing these fucked up things during the take, and then when he said cut I was like “(singing) la la la”.

Harrison Atkins: It feels like the song “Feels Like We Only Go Backwards” by Tame Impala was stuck in everyone’s head.

Harrison Atkins: Oh, for sure. For sure!

Lindsay Burdge: When I showed up, it was like me and ten…dudes.

Harrison Atkins: But we were really fun.

Lindsay Burdge: And nice. And sweet.

Harrison Atkins: (To Lindsay) How long before you felt comfortable?

Lindsay Burdge: Probably the first day, when I had to take my clothes off, and had to be sprayed with freezing water, and running in and out of the freezing cold, then I was like, (laughing). And then our producer Adam Kritzer made cookies.

Scene Creek: What was the most real?

Harrison Atkins: It got real really early. As a director I never walked away from a scene without feeling like “we got it”.

Scene Creek: How did Joe Swanberg get involved?

Harrison Atkins: Swan Boy. I went to college in Chicago, which is where Joe lives, and he was around. My professor and main mentor, who is a filmmaker called Spencer Parsons, who knew Joe, and would kind of have Joe around, and I would kind of like see him around campus.

I was making a thesis film when I was a senior in college, and I needed a baby in the movie, and I know that Joe had had Jude recently. I’m twenty-five, and this was a few years ago. I got his contact info and called him up and asked him “hey, can I shoot a scene from a movie with your son” and Joe was like “Oh yeah, dude, definitely. Do you want to come over to my house and shoot it? Just let me know when you want to do it, I’ll get it all set up for you”. He’s just really chill. A first job out of college was working on Drinking Buddies, but this was Joe’s first film that we collaborated on.

Lindsay Burdge: I met Joe through Kate Lyn Sheil and I have had a cameo in three Joe Swanberg pictures. The main one was All the Light in the Sky, the Jane Adams movie, and that was good because at the time I was living in New York and we were shooting in my Mom’s place in L.A. and I became really good friends with Jane. I know Joe from around. We’re pals.

Harrison Atkins: Joe produced the film through his production company. I was thinking about how Joe could fit into the movie and he just somehow ended up playing the role of Dean. But I’m trying to think of maybe there was a minute where he was going to be one of the friends.

Scene Creek: Did you want the movie to sound and look at certain way?

Harrison Atkins: I was really inspired by Josephine Decker’s films, Butter on the Latch and Thou Wast Mild and Lovely. I was just kind of inspired by having this subjective camera, that felt embedded in Ruth’s experiences and moved almost in a pervasive, almost voyeuristic energy that it’s almost explicitly like a documentary. Also implicating the formal language within the illness itself. The way that film moves and feels and cuts almost becomes an uncanny, emotional process, in an impressionistic way, like what your eyes are feeling. We shot almost everything on Steadicam, with a wireless autofocus. I think that offscreen sound is a big part of the world of film.

Lindsay Burdge: There’s a distracted sort of feel when your mind is elsewhere. 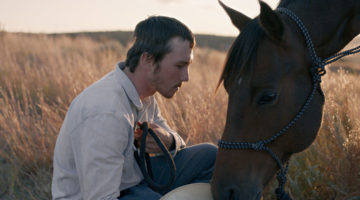 Interview: Director Emmanuel Shirinian talks It Was You Charlie