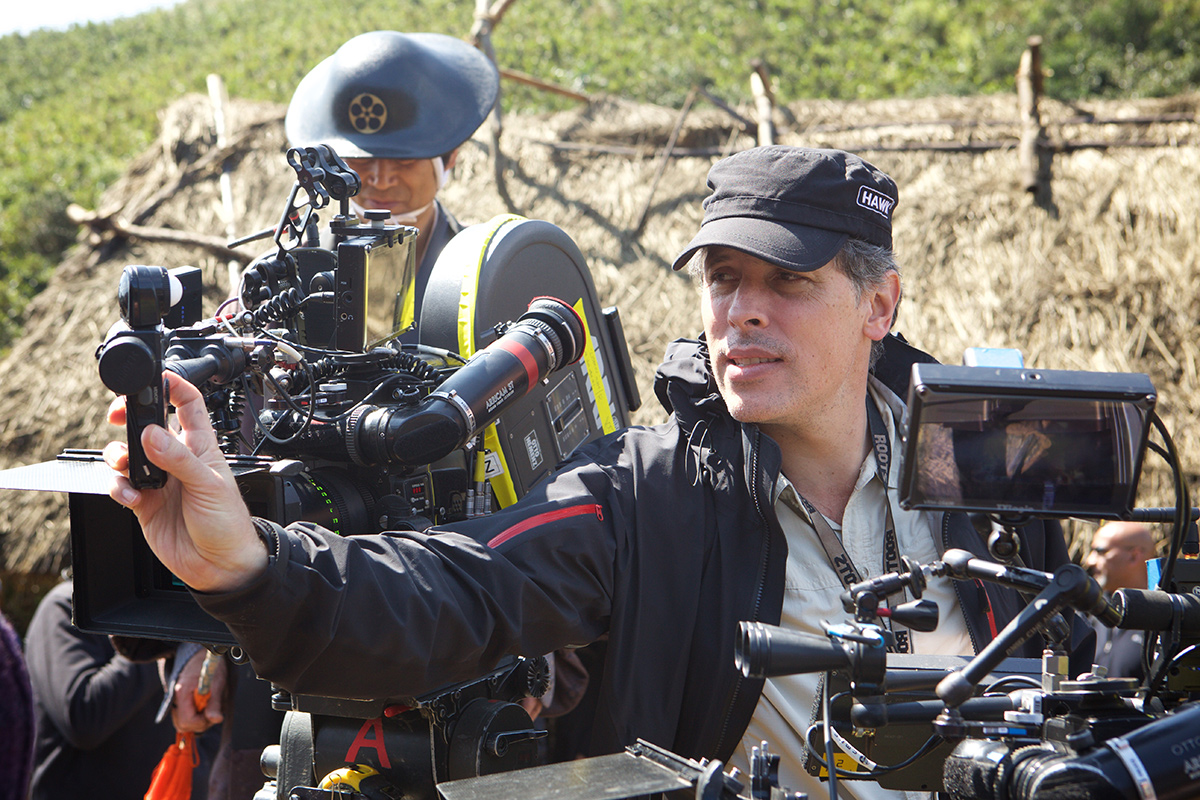 Cinematographer Rodrigo Prieto has worked with some of the greatest directors in the business. Alejandro Gonzales Innaritu, Pedro Almodovar, Ang Lee, and Ben Affleck, just to name a few. Since his celebrated work on the 2013 film The Wolf of Wall Street, he has been the go to cinematographer for Martin Scorsese, shooting his pilot for HBO’s Vinyl and already on board for Scorsese’s next project. He recently received an academy award nomination for his work on Scorsese’s most recent film, Silence. Set in 17th century Japan, the film follows two priests who navigate the terrain in hopes of locating their mentor. We spoke with Prieto about working with Scorsese, shooting on film, and how he will approach The Irishman.

Scene Creek: Scorsese has had this project on his mind for many years. When did you get involved?

Rodrigo Pieto: I only got involved after we finished The Wolf of Wall Street. In fact, it was the last day of shooting when he actually told me that he wanted me to shoot his next movie, and that was Silence. I was really very honored and excited to hear that I would be the one, because I knew that he had been storyboarding, scouting, writing and rewriting this story for years and years. He could have chosen anybody, so I guess I was really lucky to be around. I don’t know if it was divine intervention, but I couldn’t have been more thrilled. It did become a passion project for myself as well.

SC: Was there already an aesthetic developed when you boarded the film?

RP: What existed were mostly drawings that [production designer] Dante Ferretti had done, even based on previous locations. They were going to shoot it at one point in Vancouver. Scorsese has some of his own sketches but they were not designed for scenes specifically. It really did start evolving when we started prepping it and looking at locations. He was still finessing the writing, even as we were prepping. A lot of it was really based on the novel itself. Scorsese kept referring to it, so sometimes when I’m preparing a movie I purposefully avoid reading the novel, because I don’t want it to be confusing in my head. The script is what I’m shooting and the vision of the director is the way I’m shooting it. In this case the way the moments are described in the novel gave us a richness of feeling that I think we did apply to the movie. For example, there are many descriptions of the surroundings, the nature, and the temperature in the novel that the script doesn’t go into. I tried to represent that with the choice of lenses, and the choice of film stocks. For example, we decided to shoot with anamorphic lenses, but I used a set of lenses that were quite new. They’re called Master Anamorphic Lenses. They’re very pristine and very sharp. When I compared it to older anamorphic lenses I felt that these gave us a sense of being there, much more than others. It didn’t feel so much like a movie, if I may express it that way. We really wanted to – it’s kind of a cliché – have the audience feel like they were right there in Japan for the first time.

SC: You shot the film on 35mm, as you did for The Wolf of Wall Street, but this film is so demanding in terms of visuals. Was there ever any discussion or temptation to shoot digitally?

RP: Maybe on the first meeting we had. The producers were there and they were asking the question. We immediately thought that film was more appropriate. With a motion picture celluloid camera, I can get to the heart of the location and just carry a tripod and put the camera on it with the film loaded and shoot. With digital cameras, sometimes it’s a bigger process with the data, the IT, and the cabling. It can become complicated at this level of digital cinema. Of course if you’re shooting with a small video camera it’s a different story. With a quality digital camera there’s a lot to it. It’s not like it’s really faster or easier. These are some myths that digital has perpetuated. Shooting on film for a lot of these exteriors with the tricky weather and the hard to get to places – I think film was an advantage. But it was the best of both worlds, because I did have digital for the night scenes and the dusk scenes. The hut interiors were lit only with candlelight so I used digital cameras, pushing them to very low light levels. So really it was the best of both worlds. I think we’re at a very good time right now in the sense that there is still celluloid available and there are still labs that are starting to open up. It’s a medium that fortunately still exists and I hope it continues to exist. It’s not going to displace digital of course, but it’s just a medium that has its own texture and that I’m happy that I can use when it’s appropriate.

SC: Were there any Japanese films that you and Scorsese used as visual references?

RP: Yeah, there’s a movie called Ugetsu from 1953. The boat scenes at night were very much inspired by that movie. There are some scenes in it – it’s obviously in black and white – where these small boats are crossing a lake at night with this fog effect that was very magical and bizarre. They shot it in a studio and we shot it outside in a tank in Taiwan, the same tank that Ang Lee used for Life of Pi. Fog behaves very differently as an exterior, but it was very much inspired by that. Also Gates of Hell, another Japanese movie from the fifties. That was in colour. That was another movie we saw and was a reference for colour. Of course I saw a digital copy, so I’m not sure if that was the way it looked when it was originally on a film print, but the highlights were kind of yellowish. This was something that towards the end of the movie we used with a sort of golden-yellow hue towards the end.

SC: You’re going to be shooting Scorsese’s next feature The Irishman. It’s being made by Netflix, and will largely be seen on smaller screens. Is that going to affect the way you plan to shoot it?

RP: We really haven’t sat down and talked about it in any sort of detail yet, but I’m pretty sure we’ll approach it as if it were a movie for the cinema. It was similar even when we did the pilot for Vinyl, which was for sure going to be seen on televisions. It was just like shooting a feature film with Martin Scorsese. There really wasn’t any change in approach. So I’m sure it will be the same for this. I think we’ll imagine it for the big screen, and of course I’m sure it will have a release in theatres. Then it will just translate for the smaller screen.

5 Questions with Gaspar Noé and Karl Glusman of Love 3D

Interview: P.J. Byrne chats about The Wolf of Wall Street