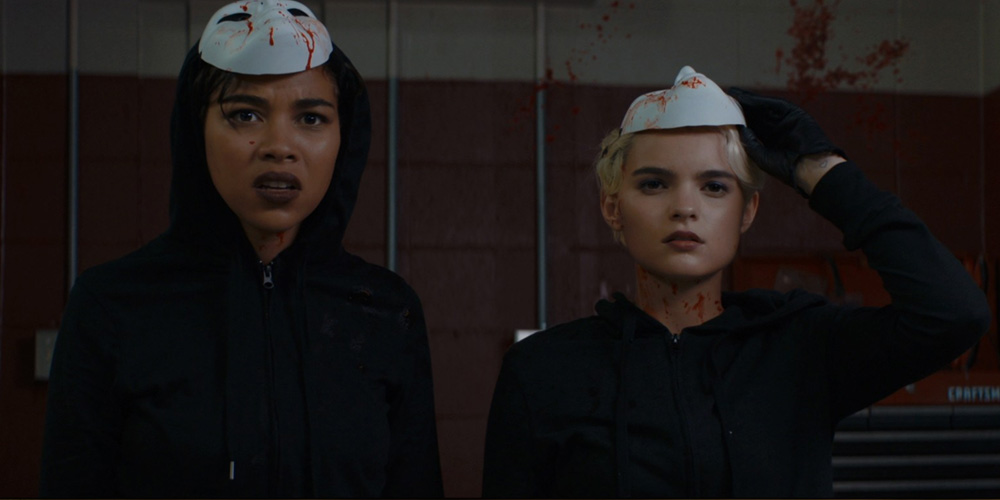 Tragedy Girls starts as a fun teen adventure: high schoolers McKayla (Alexandra Shipp) and Sadie (Brianna Hildebrand) are best friends looking for fame on social media. Trying to make an empire out of their #TragedyGirls Twitter, Tumblr, and online videos, they capture a serial killer and murder people in their town while performing mourning for sympathy and the adoration of their peers.

Obsessed with their online brand, repeating their hashtag to anyone who will listen (and even those who won’t), and looking like they stepped out of a Forever 21 catalogue, McKayla and Sadie are perfect teen girl constructions. But they are far too perfect: the best friends are an over-distillation of what high school girls would be, coming off like The Monkees of feminine adolescence. Though Shipp and Hildebrand offer great performances, saving the caricature by making the friendship seem genuine and infusing the roles with wit and energy, the characters feel too much as though they are pandering.

Slightly out of date, the aesthetics of Tragedy Girls are always a bit off: the girls’ glittery prom is less 2017 and more The O.C., while the soundtrack (including an M.I.A. song) is almost confusing: why does everything seem to be about 5 years out of date? Without a real grasp on teen life from the present (or recent past), it isn’t surprising that the film was written and directed by adult men. While watching the film, things feel strange, like an uncanny version of teen-girlhood which is not quite right but bright enough, fast enough to appeal. But with knowledge of who was making this one wonders: how much of the film is just an attempt to exploit a certain demographic?

Tragedy Girls isn’t bad, by any means. It drags at some points, and the gentle mockery of social media obsession in younger girls is tired (perhaps the “Get off my lawn!” of this generation), but the film is entertaining, with wonderful leads. It just seems obviously to be a product, made for but not by a specific audience, and where’s the fun in that?