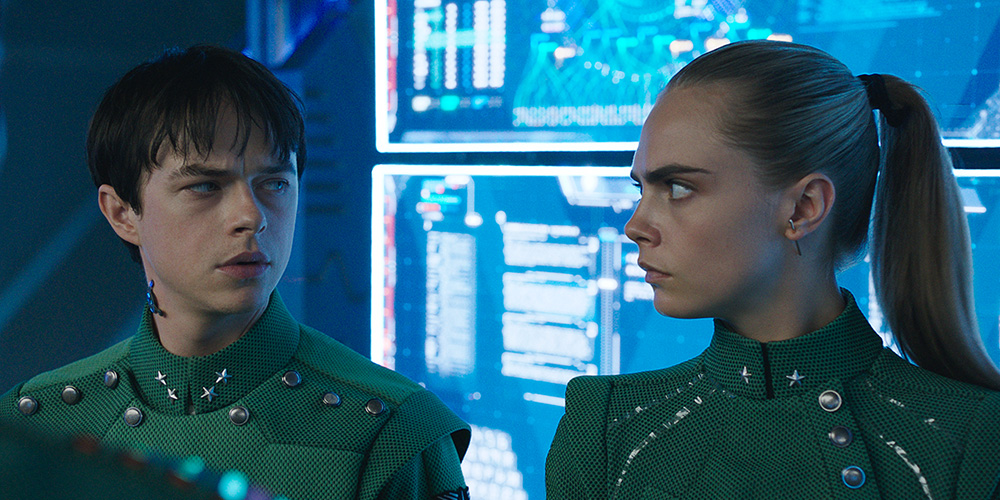 With his 1997 classic, The Fifth Element, director Luc Besson brought us a fun, stylish, and exciting sci-fi action film. Returning to these roots with Valerian and the City of a Thousand Planets, Besson has brought us little more than disappointment.

The convoluted plot is set in the 28th century, where government agents Valerian (Dane DeHaan) and Laureline (Cara Delevingne) repeatedly get each other in and out of trouble while attempting to determine what happened to the destroyed planet Mül. With a 137 minute runtime, however, this relatively simple narrative is stretched out and needlessly episodic. New locales, alien species, characters, and conflicts are brought in and let go frequently, yet almost none of them have any value.

The worlds which Valerian constructs are almost all blandly ugly, from the sweaty desert, to the damp industrial space station, to the grimy city. The colour palette seems almost perpetually stuck in smog-tones. Mül, with its pearlescent aliens and beach setting, stands out as a singular beauty within the film, but feels too seapunk to be anything more than derivative, and is perhaps too trendy to be stylish.

This lack of taste would be a problem for any film, but Valerian suffers especially when compared to The Fifth Element’s colour and style. The clothing, in particular, is embarrassing. Rihanna’s brief appearance in the film as the shape-shifter Bubble largely involves her wearing what look like store-bought sexy Halloween costumes, while Laureline’s final gown in the film feels about five years out of style today. With The Fifth Element’s Jean Paul Gaultier-designed costumes, the film featured futuristic couture. Valerian feels comparatively ready-to-wear.

Without a strong aesthetic or narrative, it is unfortunate that the film also lacks engaging lead actors. Devoid of any chemistry, it is difficult to care about Valerian and Laureline’s will-they-won’t-they romance. Always feeling forced, the two grapple with the issue of marriage and monogamy in a manner which feels more comfortable with mid-century gender roles rather than the future, let alone 2017. Valerian, a relatively charmless and irritating character, constantly harasses Laureline while undermining her position and skill. While Laureline does nothing to merit love nor respect from the audience, Besson seeming to mistake dead-eyed flatness for being cool, Valerian actively antagonizes his love interest, and those of us watching him.

Visually without any coherence, with a story that feels aimless, and with unlikeable leads, Valerian is a slog to get through. It is a film that has its moments, but they are almost all lost in this overlong and self-indulgent void. It is simply too much, but never in the chic or charming way Besson has demonstrated in the past. The result is numbing.

Review: After the Ball