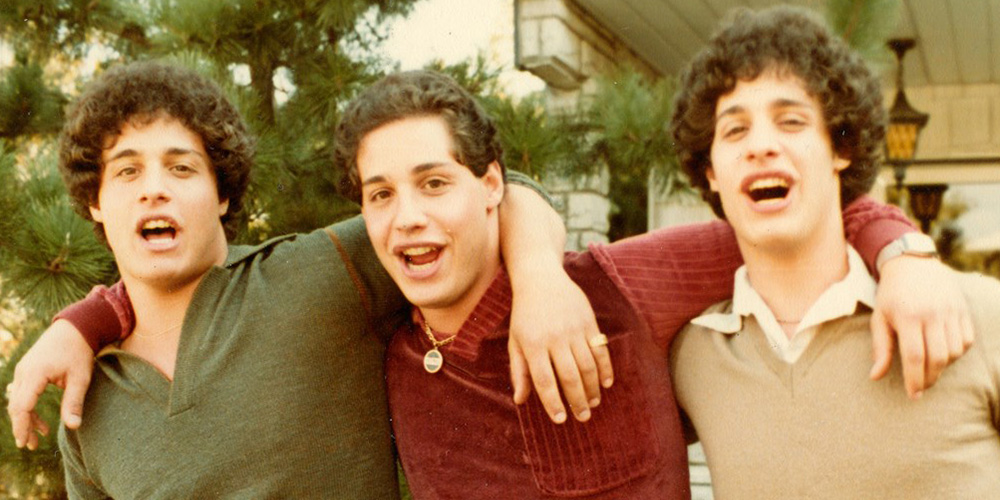 Three Identical Strangers is a feature documentary that tells the story of three triplets separated at birth who are then reunited in an unusual way. The film opens with one of the triplets, Robert Shafran, recounting his unusual first day at college, where people greeted him overenthusiastically. He soon realises he is being mistaken for someone else. After comparing some details of birthdays and adoptions over the phone, he and Eddy Galland realize they are twins. The story hits the press and the coverage soon leads to a third triplet coming forward. The story opens in a light, anecdotal tone with talking heads of the real people involved alongside a POV re-enactment that has warm stylish visuals. It plays out as a heart-warming story, and for a while it is. And it is enjoyable as one. But it is even more enjoyable when it gets to the gritty details.

The film takes a dark, unexpected turn that has the creepiness and weirdness of an urban legend or conspiracy theory. As we learn the details of the twist they sometimes repeat clips to let you see them in a new light – this feels a bit like the filmmakers don’t trust the audience to put two and two together, but it creates an atmospheric feeling of unease.

It is here that a feel good documentary becomes something resembling a twisted psychological thriller. The documentary sets up that it is reporting a small scale story – one where they simply interview people involved to relay a story already out in the open. But it soon develops into something more like an investigation – the producers begin uncovering shocking details for themselves and relaying it back to those involved. They spend the rest of the documentary playing between a small scale, heart-breaking story and a large scale, sinister story.

The film is narrated in talking head style by the people involved in the story, which is visually combined with archival footage, re-enactments, and photos. The style in which these are all presented shifts through different tones effortlessly as the story switches between dark and light, heart-warming and sinister.

The story holds a full length movie and is paced well – interesting details are scattered throughout. It is a story that these days would typically be condensed to a clickbait article or viral YouTube video, but it really gains impact and emotion by being delivered slowly and carefully.

Three Identical Strangers is a bizarre story, and the film will cleverly take you through the same emotional shifts as those in the story experienced.