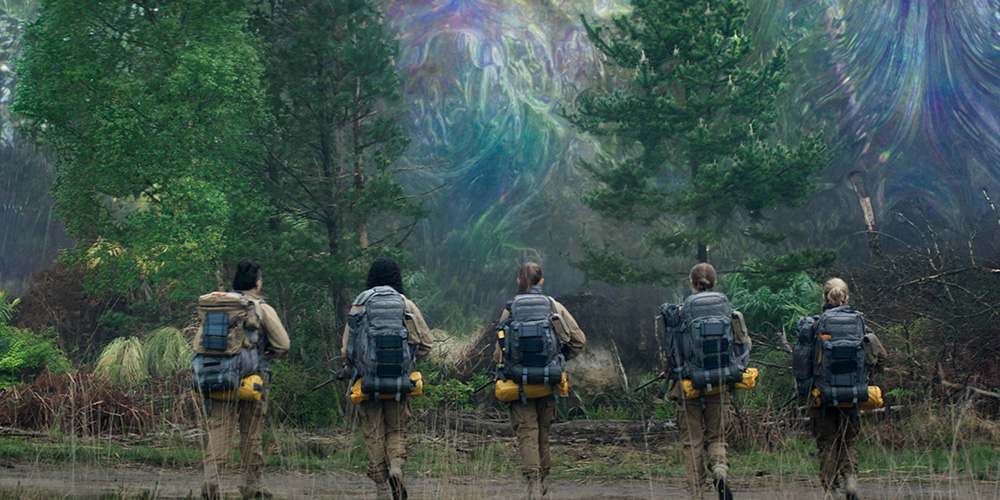 2018 has a weird movie! Not just a plain and palatable weirdness either (looking at you, The Shape of Water), but an unnerving, dark, beautiful, and bizarre weirdness that’s been missing from blockbusters for some time.

Natalie Portman stars in writer-director Alex Garland’s Annihilation, a loose adaption of Jeff VanderMeer’s novel, in which a grieving scientist named Lena (Portman) is called to Area X, a classified government site dedicated to studying an extraterrestrial threat. Lena is a former solider turned biologist (turned solider again, basically) tasked with entering The Shimmer, a mysterious and stunning force field which has overtaken a large piece of the Florida coastline and is slowly creeping towards more populated areas.

Before Lena is taken to Area X, her husband, Kane (Oscar Isaac), returns home as a former shell of himself after nearly a year presumed dead following a classified military mission. As it turns out, the government has deployed a number of teams from Area X into The Shimmer and Kane has been the only person, or thing, to return alive, or whatever you can call. The government is as perplexed as Lena on her husband’s condition, which quickly deteriorates after arriving back home, and Lena is determined to confront The Shimmer and the mystery of Kane’s return herself.

Led by Dr. Ventriss (Jennifer Jason Leigh), the all-female, all-scientist team consists of Lena and Anya Thorensson (Gina Rodriguez), Josie Radek (Tessa Thompson), and Cass Sheppard (Tuva Novotny). They all come from different scientific backgrounds and contrast the military types who have been sent in with exclusively dire results.

Garland doesn’t dwell on the gender breakdown of his leads but having the expedition told solely from the female perspective naturally makes the film feel different than similar fare. The cast is excellent and gives restrained, nuanced performances that lend to the subtle ways in which Annihilation sets itself apart from other entries in the genre.

With no ability to use communication or location devices, the team is at the mercy of the elements of The Shimmer, which have a confounding impact on the mental and physical state of each member. As they follow the sun towards the lighthouse on the coast where The Shimmer first began, the characters and the audience race to piece together what exactly is happening and where this all leads.

Where it all leads will be the subject of debate as the Garland commits fully to the serious themes explored throughout the film, resulting in a brainy and potentially alienating third act. However, regardless of how the last twenty minutes goes over with audiences, the build-up, including some truly terrifying scenes in The Shimmer, is expertly done. Annihilation is a difficult watch that asks a lot of its audience visually, emotionally and intellectually, but is worth the effort, even if the immaculate build-up outshines the final act.