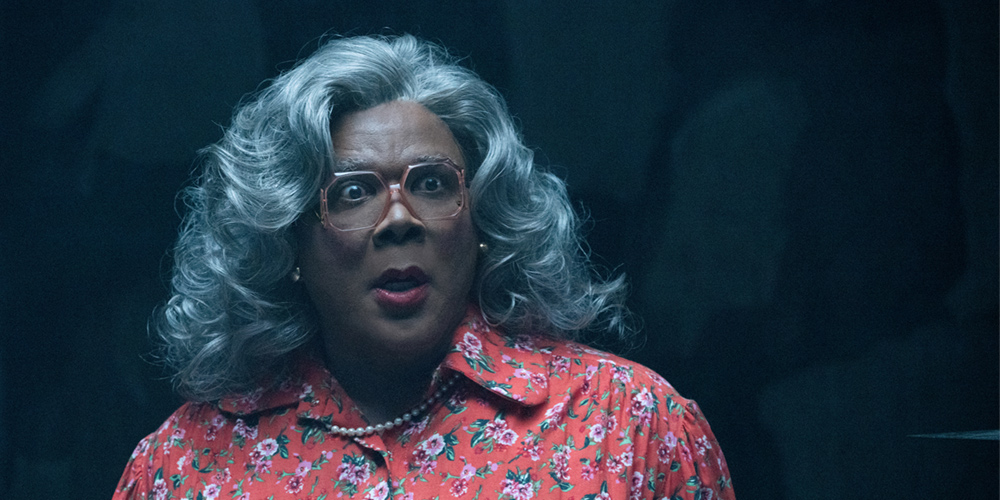 Last year, Tyler Perry brought Madea out of a three-year hiatus for Boo! A Madea Halloween. The three-year gap between that film and the previous Madea excursion was Perry’s longest since the debut of Madea in the 2005’s Diary of a Mad Black Woman. Boo! had a great set-up putting Madea (Perry), her brother Joe (also Perry), favourite Aunt Bam (Cassi Davis) and newcomer Hattie (Patrice Lovely) face to face with some Halloween ghouls. The film suffered from some overly drawn-out sequences and a few stale jokes borrowed from previous films. Exactly one year later, Perry returns with Tyler Perry’s Boo 2! A Madea Halloween. The central concept and characters remain the same, yet Perry has done away with the missteps of the first film, creating his best Madea venture since 2011’s Madea’s Big Happy Family.

In Boo 2! Brian (Tyler Perry, no wig or makeup) once again butts heads with his daughter Tiffany (Diamond White) over Halloween. Having just turned eighteen, Tiffany defies her father and ends up at a frat party at a spooky lake. When Brian finds out, he calls on his Aunt Madea to help locate his daughter. Thus, Madea, Joe, and Hattie head out into night, where they eventually come face to face with two chainsaw-wielding killers and their ghost children who are murdering the partying teens.

Tyler Perry has been making structurally similar films for years. In Boo 2! he utilizes that structure to evoke a new response. A great blend of PG-horror and Perry’s classic comedy make for an unparalleled experience. In previous Madea films, the Madea portions of the storyline are usually matched with highly dramatic scenes covering a range of difficult issues. With this film, Perry has exchanged drama for horror, which blends wonderfully with the film’s many comedic moments. The horror scenes build high tension, which is perfectly smashed whenever Madea appears. Ultimately, this masterful blend of genres is what allows Boo 2! to transcend the effects of its recent predecessors and thrive as one of Perry’s best Madea-themed films.

Review: When Marnie Was There