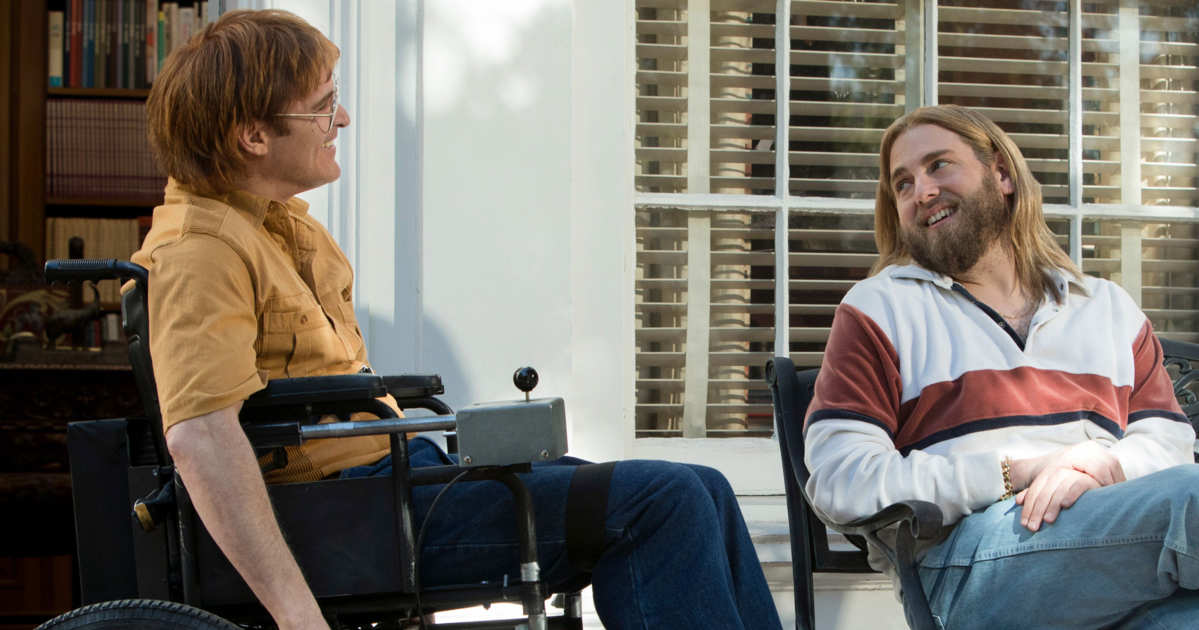 Don’t Worry, He Won’t Get Far On Foot is a film that should be good, but is eclectic and messy. The film is based on the memoir of the same name, and follows the true story of the panel artist John Callahan, played by Joaquin Phoenix, who is battles with alcoholism and gets into booze-fuelled car accident that leaves him paralysed. The premise is great, and the cast (including a long-haired Jonah Hill) is great…but despite director Gus Van Sant’s best efforts to make this an atypical biopic, the end result is hard to watch.

The film opens with too many angles on how the story is being narrated: John is telling his story on stage to an audience, he is also telling his story at an AA meeting, and also talking to a group of teenagers who helped him when he fell off his wheelchair. These premises by which the story is being narrated disappear at some point and don’t re-emerge until the end. Another story telling method we are introduced to is the use of small animated sequences of his comics. These are delightful, but again they disappear for most of the film.

The problems with the writing continue throughout the film. Plot points are often not set up properly, and new characters appear out of nowhere. It could be argued that a story based on real life isn’t as clean cut, but it is a writer’s job to make sense of it – to choose what details to include and leave out, and how to present it. Parts of John’s life often are not mentioned outside of when the story suddenly becomes about that part of his life: we see this with his estranged mother and his artwork. Even more bizarre are the way certain characters are introduced: often strangers just appear and befriend him for no reason. These moments don’t seem grounded in reality, which is ironic since it is based on a true story.

The performances are nothing exciting; except for the rare moment they are given the opportunity to shine. Jonah Hill’s character’s emotional monologue is beautifully performed. A scene where Jack Black’s character is confronted by the lead John is also a highlight of the film. The moment   where Joaquin Phoenix gets an opportunity to shine doesn’t go as smoothly. A recently paralysed John  has an emotional conversation with a nurse, but he strains his voice too much and it is difficult to hear what he is saying.

In the list of poor choices though, one stands out as the most distracting. In what can only be assumed to be an attempt to make the film quirky or a throwback, we are constantly faced with camera shots that zoom exaggeratedly into characters faces…or objects…or anything. It is frustratingly distracting and looks out of place. The bizarre cinematography choices did pay off though with sequences of rolling transitions between various series of shots throughout the film.

Don’t Worry, He Won’t Get Far On Foot is full of bad choices and messy story telling. Two hours of it. It got further on foot than it should have.