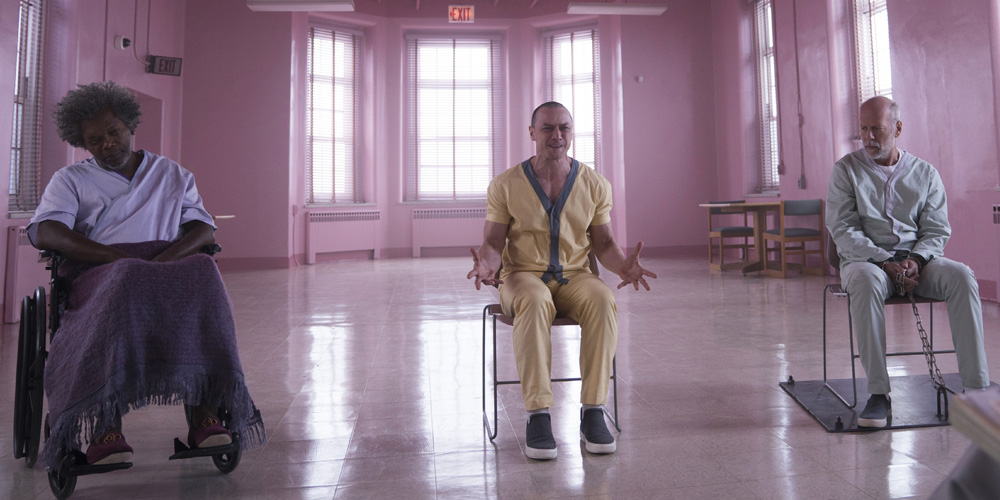 Following Unbreakable and Split, M. Night Shyamalan, perhaps the most divisive mainstream director working today, returns with Glass, the finale in a trilogy nearly 20 years in the making. All of the series’ characters are back: David Dunn (Bruce Willis), the stoic, indestructible Philadelphia security guard, Elijah Price (Samuel L. Jackson), a highly-intelligent criminal mastermind with extremely brittle bones, and Kevin Wendell Crumb (James McAvoy), a deeply troubled survivor of childhood trauma whose 24 personalities, or most of them anyway, are yet again on full display.

Shortly after the events of Split, Dunn, now operating comfortably in full vigilante mode, rescues a group of captive young women from Crumb, whose group of bad personalities, known as “The Horde” are operating Kevin’s body full-time. Both are apprehended however and join a heavily sedated Mr. Glass in a psychiatric facility, under the care of Dr. Ellie Staple (Sarah Paulson). Dr. Staple specializes in treating patients with a particular delusion of grandeur that makes ordinary people believe they have superhuman powers; one can presume she leads her niche field since she’s given access to real treasure trove.

So what happens when you put Dunn, Price, and all of the personalities of Crumb into a creepy asylum under the watchful eye of a controlling, mysterious doctor? Both more and not nearly as much as expected, it turns out. There is a ton going on in this movie but the film languishes in the middle under the weight of its ambition and seriousness. Bruce Willis is given shockingly little to do, the energies of Unbreakable and Split never quite come together, and most critically, there just isn’t the sense of wonder and discovery, however dark or twisted, that exists throughout Shyamalan’s best work.

Altogether though, some of it really works, and there’s a certain novelty to taking in a wholly original trilogy that obviously has a lot on its mind. Glass is imperfect, often heavy-handed, and a lot less fun than it should be given the concept, but Shyamalan has just enough go right to make his latest effort worth a watch.

Stuck between childhood charm and adult gravity, the film is lost