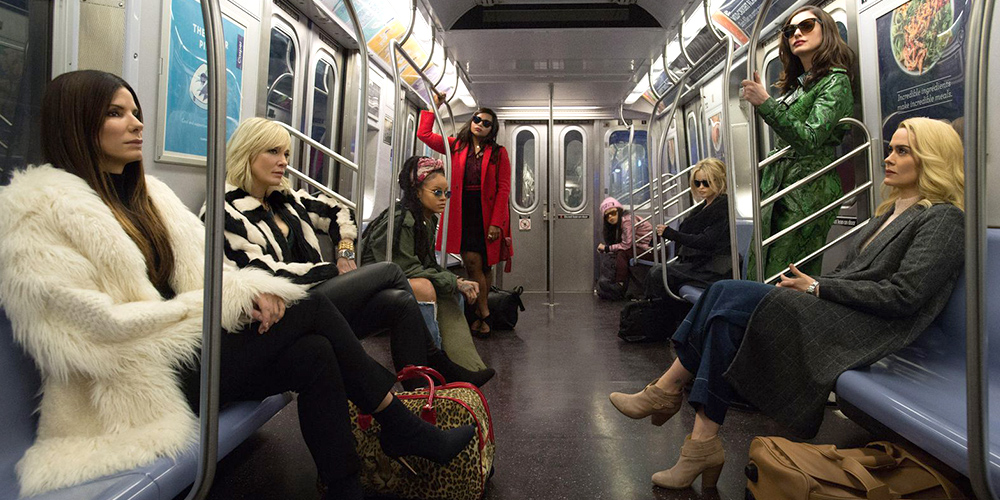 Ocean’s 8 could have been “Ocean’s 11 but with ladies,” but is a relief to say that the film goes beyond easy representation. Starring Sandra Bullock as Debbie Ocean (sister to George Clooney’s Danny Ocean of the original film),  the just-out-of-prison criminal rouses a gang of women to steal a diamond Cartier necklace at the Met Gala, to be worn by vapid celebrity, Daphne Kluger (Anne Hathaway). The group works with Debbie’s plan, meticulously crafted during her five years in jail, to pull of the heist without a hitch.

A lot of Ocean’s 8 is not bad, but is also not at all remarkable. There is a pleasure in the display of capitalist gain — Debbie steals perfumes, couture, and cosmetic, and we watch montages of glorious jewels and gowns — without capitalist participation; a pure (and purposeful) fantasy, but pleasurable nonetheless. The film is a flip-side of the Ocean’s series: if you like casinos and want to be Dean Martin, stick to the Soderbergh originals; Ocean’s 8, meanwhile, offers a different vibe to the same plot. Is it an overly (and perhaps offensively reductive) gendered revision, an easy way to grab female audience by adding girly elements to a dully macho franchise? Perhaps. And this is supported by the general lack of plot, raising the question of was there any thought put into the film beyond “what if they were all women?” Beyond flashy gems and pretty dresses, there isn’t much of anything else, with little character development, and no conflict: any issue Debbie and her friends run into is almost immediately, and easily, resolved, denying tension or twists to which should have been an otherwise thrilling heist.

But it is the actresses which elevate the otherwise clunky film. Of Debbie’s gang, both Rihanna and Mindy Kaling shine through in their roles, though they are sadly underused in a film with just too much going on. And Anne Hathaway, playing to camp perfection, manages to both bring her character’s shallow froth to comedic heights while endowing her with a humanity which could have easily been lost. With overall good performances, Ocean’s 8 is a film which is enjoyable, if forgettable. But sadly, it should have been better to be worthy of the women in it.