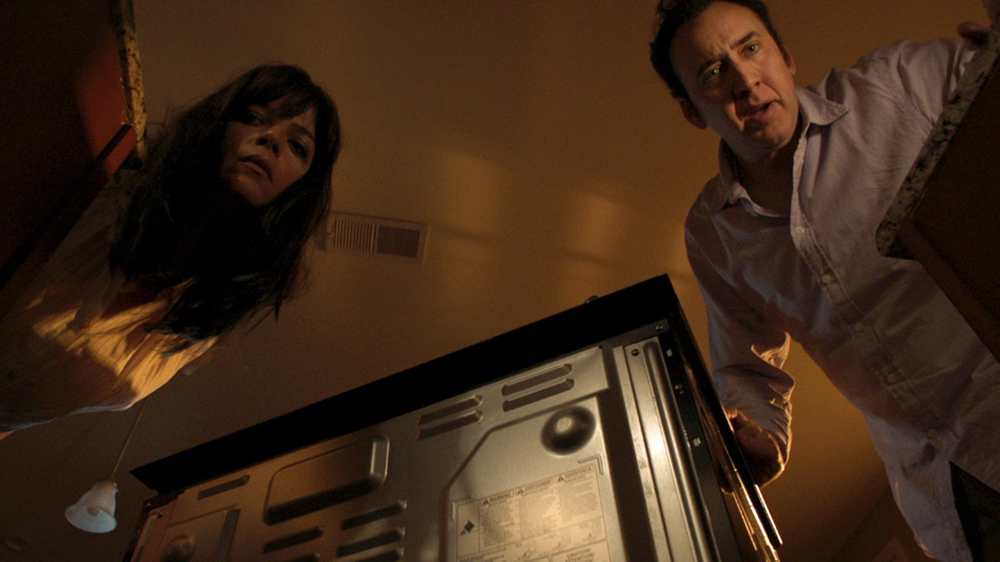 New Nicolas Cage films are like those pairs of socks that you get for Christmas from your mom: at the time, you don’t want them, don’t want anything to do with them. But then, when some days pass, and maybe you step in some severely wet puddle or something and your boots get really wet, then you recognize that yes, though this was not at all what I asked for, it is, nonetheless, a gift, and for this I should be grateful.

At least, that is how I felt upon walking out of Mom and Dad, the latest film directed and written by Brian Taylor, which premiered this past September as part of TIFF’s Midnight Madness programme and goes into wide release this coming Friday. Taking place over the course of one afternoon, the film revolves around Brent Ryan (Cage) and his wife, Kendall (Selma Blair), who, on account of some mysterious epidemic somehow set off by white noise, are driven, as with all the other parents in the tri-state area, to want to kill their kids, Carly (Anne Winters) and Joshua (Zachary Arthur).

It is a simple plot — a stupid plot, even — made simpler and stupider by Taylor’s sloppy filmmaking, poorly choreographed action scenes, and unsightly, incongruous flashbacks. Nicholas Cage, the greatest ham actor of his generation, of course does not improve things much. (There’s a particularly crazy bit where he eulogizes his lost youth while sledgehammering a hand-made billiards table to the tune of “The Hokey Pokey,” if that is any indication of his performance.) Indeed, you will likely walk out of the theatre afterwards and say, audibly and loudly, What did I just watch? And you will likely think you wasted 83 minutes of your life. But then, like those socks your mom gets you at Christmas time, you will realize two weeks later that Mom and Dad isn’t so bad after all.

It isn’t so bad because, despite its flaws, ultimately, it gave you hope. Let me explain. At a time in which everything is serious, in which everything takes itself too seriously, Taylor’s solo directorial debut comes as a breath of fresh air. There is, after all, not a single serious bone in Mom and Dad’s body. There is no clear structure, no clear characters, no clear attention to the craft at large. Instead, Mom and Dad is a film made for the love of film, for people who enjoy film and, most particularly, for people who enjoy campy film. And isn’t there something to be admired in making film for film’s sake?

At least, that’s what I’ve come to terms with in the wake of seeing this simple, stupid film. That sometimes, the simple and the stupid are what we need. It is no great piece of art, that is for sure. What it is, is a wild and wacky escape, a short hour-and-twenty-or-so-minutes away from anything that remotely matters. Like Christmas socks, then, useful in a pinch, Mom and Dad is that gift you don’t recognize you need until you get it.

A mixed but enjoyable bag for long time fans and the family.