It’s time for more awards season favorites on DVD this week, including the incredibly overlooked ‘Tinker Tailor Soldier Spy’ (R). The compact adaptation of John le Carre’s famous spy novel got very little love this side of the pond, which is unfortunate, because Gary Oldman’s interpretation of George Smiley is one of those rare career-making performances that deserves to be seen. He’s joined by an excellent supporting cast including Ciaran Hinds, John Hurt, and Colin Firth in the story of a spy searching for a mole in MI-6 during the bleak days of the Cold War. Tomas Alfredson (‘Let the Right One In’) also deserves a mention for his excellent direction.

Also rather dark—and also a literary adaptation—is ‘The Girl With the Dragon Tattoo’ (R), the first in an expected trilogy based off of Stieg Larsson’s novels about computer hacker Lisbeth Salander. The U.S. version of the film has made an instant star of Rooney Mara, much as the Swedish version did for Noomi Rapace, but some fans remain torn over which version to embrace: the international, or the Hollywood remake? However you feel about Hollywood’s apparent desire to one-up any foreign hit, the film is worth watching for Mara’s gut-wrenching performance and David Fincher’s tight direction, which sadly earned him very few accolades this season.

On a much more family-friendly note, ‘The Muppets’ (PG) cruises onto DVD, and it’s likely it’s going to be just as big in the home theatre market as it was at the box office back in November. That’s all thanks to the writing and wit of star Jason Segel, who’s managed to successfully reboot the franchise for a new generation. Segel plays Gary, who along with Mary (Amy Adams) and his Muppet friend Walter discover a nefarious plan by a Texas oilman to raze the historic Muppet Theater—unless the now-disbanded Muppets can reunite to save it. It’s a little clunkier than some of the classic Jim Henson films, but if you’re a fan of the fuzzy guys, you’ll want to add it to your queue.

Finally, the black comedy ‘Carnage’ (R) pits two couples against each other as they try to resolve the playground bullying incident of their respective offspring. However, when the parents of the “victim” (played by John C. Reilly and Jodie Foster) and the parents of the “bully” (Christoph Waltz and Kate Winslet) finally meet, their behavior is little better than the childish impulses of their sons as they squabble and devolve into ill manners over the course of the evening. It’s not necessarily the best work of any of the involved players, but it’s still got a bitterly sharp script anchored by four very capable actors, so it’s worth seeing if you’re a fan of any of the leading ladies or gents. 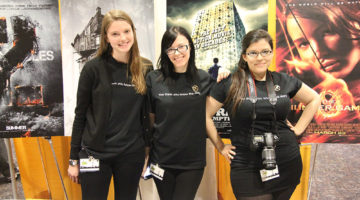 First trailer for 'Lola Versus'

Trailer: 'Rise of the Planet of the Apes'

Win passes to an advance screening of BULLY in Toronto, Edmonton and Calgary!

Movie Review: Cabin in the Woods