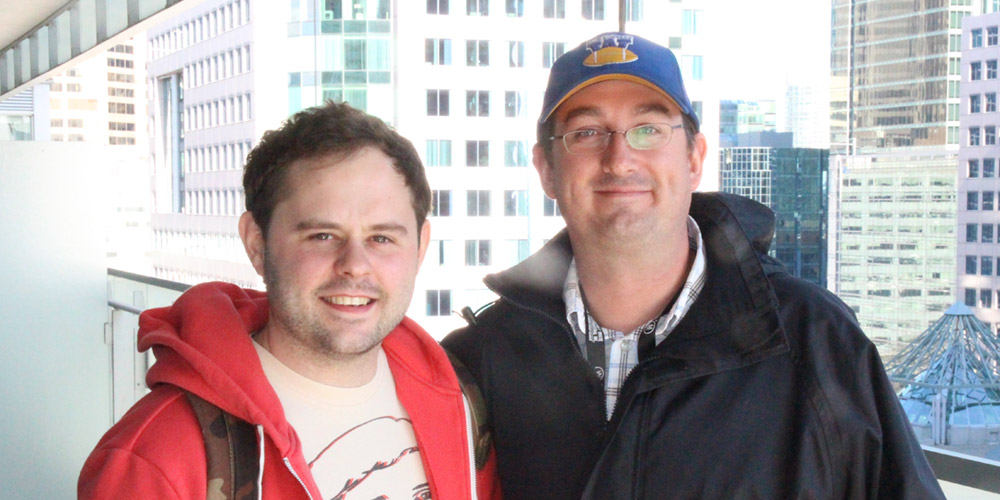 We first heard about the Lewis Bennett and Calum McLeod’s film The Sandwich Nazi at South by Southwest, when it was one of only a handful of Canadian films at the Festival. We saw the description and sought out the film immediately. Because of a miscommunication, we were unable to speak to the film-making team until Hot Docs, when the two were kind enough to visit us while their film was at the festival.

Now, the film plays a fest of a different kind, the Open Roof Festival in Toronto. This is the perfect time to see the film, along with a sandwich, perhaps, or a cold drink. The experience of seeing the film is truly one of a kind, and there was plenty that the guys told us which was just too raucous to recount in an interview, It’s in the film, though, which excellently expands on the short.

Scene Creek: How did you approach the film?

Lewis Bennett: I’d heard that Salam (Kahil) was quite a character

Calum McLeod: Lewis asked Salam if he would be interested in letting him make a documentary about him, and he said “Sure, come by on Saturday, I’m making some sandwiches for the downtown east side”. Within days we’d started making the short film. And the short film was well-received. And we realized that there was more to the story.

Scene Creek: How much footage did you have to go through?

Calum: So it wouldn’t be sad.

Lewis: We went over one hundred hours.

Calum: Lewis did an exceptional job of culling it down.

Scene Creek: We don’t really have a place like this in Toronto.

Calum: I would say that we have a deli like this anywhere else in Vancouver. I can’t think of another place where you walk in and you just get what you get. And there’s a menu, but there’s no ordering. Whatever he makes you, that’s what you get.

Lewis: It’s kind of nice if you’re indecisive but hungry and don’t know what to pick.

Scene Creek: Were you surprised when people laughed?

Calum: Relieved. We come from a background with a funny, odd or weird sensibility. We approached the subject matter from that perspective. We wanted the funny bits to hit: when we showed it at South By, and laughs landed at the right times, it was…awesome. One thing that I didn’t expect was that there were gasps.

Lewis: It’s interesting to hear that in a movie theatre with some of the car accident and hospital stuff. To be able to create that, the laughing and “Oh my God” is amazing.

Calum: We craft our films to get a reaction.

Lewis: After the short came out, we heard about some guy from Idaho or Utah drove up a day to go to see Salam and get a sandwich and be entertained.

Calum: We’ve heard from people that have said “I’ve been thinking about your film all night”

The Sandwich Nazi plays Wednesday as a part of the Open Roof Festival at 99 Sudbury. The film starts at 9 p.m.

5 Questions with Tamara Duarte of My Ex-Ex