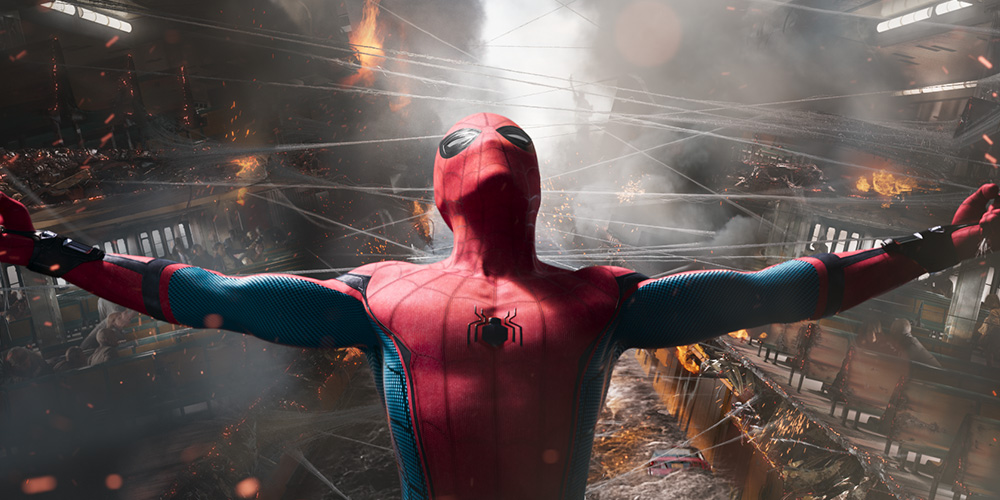 This review will be a confusing one for most. You see, when you do the math Spider-Man: Homecoming is a great movie – this review will cement that. This review however, will also dive into the conversation of excess and what it means to an audience that is receiving its third take at the Spider-Man franchise in fifteen years. It’s the best take yet, and the freshest to date, but the experience will be one that you will leave in the cinema for all of the wrong reasons. Why? Not because it’s a bad movie, but more troublingly, because we’ve gotten too much of a good thing and at this point, why care?

Don’t expect any origin stories here! We kick things off at Stark Tower moments after the events of the first Avengers where we are introduced to Adrian Tomes (Michael Keaton), a clean up crew manager that is being pushed off the site by the Department of Damage Control, a new arm of the government sent to handle the various ravaged zones that are left in the wake of these large scale superhero battles. His team manages to get away with some of the “waste” from the Stark Tower incident, which they soon realize holds powers beyond what they can imagine. Fast forward eight years and Tomes and Company have created quite the criminal organization selling their unique brand of alien weaponry, which Tomes manages personally as the Vulture. Looks like we’ve got a bad guys folks! This is also the point where we rejoin Peter (Tom Holland) moments after his first battle with the Avengers, which we relive in a riveting film by Mr. Parker himself… which was probably made on his phone. Tony Stark (Robert Downey Jr.) sets him out in the world with the hopes of more “secret missions”, but more importantly, allows him to keep the new suit! The Spider-Man grows into his “Friendly Neighborhood” title quite quickly, but grows out just as fast, seeking out big bad guys that he hopes will impress Mr. Stark. As most kids do, Peter finds himself biting off more than he can chew, finding that he’s unable to cope with being a horny teenager with extracurriculars and saving New York City from the Vulture. The film takes an interesting turn when the danger becomes so real that it goes out of Spider-Man’s inexperienced and over zealous hands. From here, Peter needs to find out that being a hero is about more than having cool powers and a Stark Tech suit, it’s about understanding that with great power comes responsibility.

This is one of the many things that Homecoming does so well. It’s ability to break away from the Spider-Man cinema tropes allows this film to stand alone, if only for a moment. We all know the backstory, and the filmmakers know this as they bob and weave around Mary Jane Watson, Uncle Ben, and a spider bite. Themes aren’t blurted out but woven into the plot, one that unfortunately falls flat on it’s face moments after the third act begins. It’s refreshing to say the least.

This has to be one of the most diverse casts ever seen in a high school flick, and it felt real. Midtown High was a believable high school in 2017 and studios should take note. Jon Watts manages to direct the group, young and experienced, with beautiful chemistry which fills the screen with wit and heart. Michael Keaton ironically plays Vulture with a flare and charisma that brings dimension to an otherwise flat character. The same can be said the momentary presence of Marisa Tomei who’s Aunt May is seen sparsely throughout the film.

So, as you can see, on paper Spider-Man: Homecoming is a great film. The word “fantastic” could even be tossed around. It’s just that when you leave the theatre and look back on your experience, aside from the laughs were you ever really engaged or enthralled? As fresh as it all was, for some reason you can’t help but feel that you’ve been down this road before, and unfortunately it’s because you have… three times. Studio contracts are a funny thing when you see the excess it’s created in the world of Spider-Man, but it quickly becomes a sad thing when you realize that it’s taken the magic out a great film.