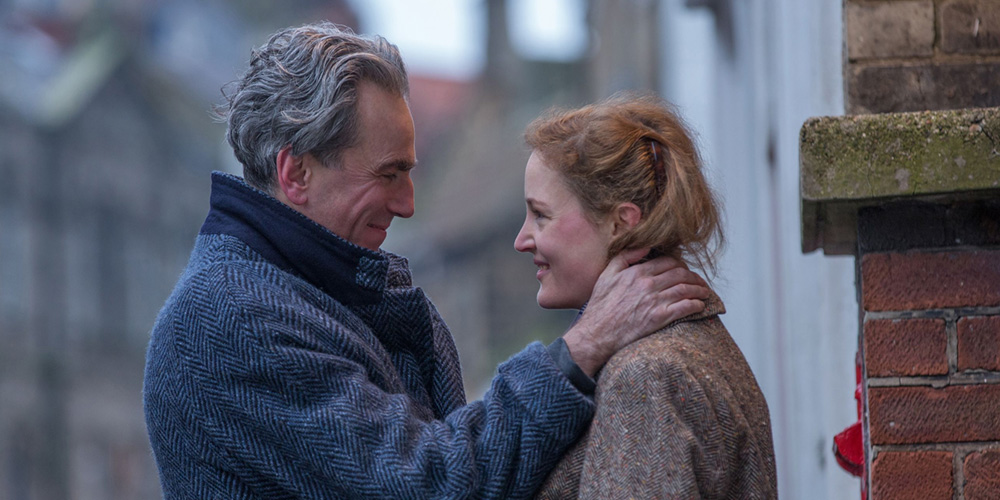 In preparation for his role as fashion designer Reynolds Woodcock, three-time Academy Award winner Daniel Day-Lewis made a Balenciaga dress from scratch. Who cares? Usually I wouldn’t, yet this extreme – though not uncharacteristic – method of preparation is suited for Day-Lewis’ character in Phantom Thread. Forget about Day-Lewis’ much publicized technique of staying in character and therefore driving everyone on set absolutely mad. Reynolds Woodcock is a man who takes control to intense lengths. Therefore, there is not a more perfect piece to be the second collaboration between Day-Lewis and director Paul Thomas Anderson.

In the 1950s, Reynolds Woodcock designs dresses that make “dreams come true”. Designing with obsessive detail, Woodcock needs everything in to be in particular fashion in order for him to work. Designing the dresses is only half the battle. Woodcock also toils over the idea of who will wear his creations, and whether or not they are truly worthy. The operation is one that he can barely contain, his live-in sister Cyril (the criminally underrated Lesley Manville) assisting him through each step. The two have a routine that is as peculiar as it is particular, but it is one that works. Enter Alma (Vicky Krieps), a waitress who catches Woodcock’s eye, and soon his heart. With a new muse, Woodcock approaches his work with an inspired veracity. Soon, as the routine is disrupted, the entire Woodcock household begins to unravel.

Phantom Thread is perhaps PTA’s most narratively straightforward film to date. Though it carries its rather simple plot alongside a pathos and psychological intensity found in the auteur’s very best work. It is perhaps best described as Punch Drunk Love meets The Master. For the first time, in addition to writing and directing, PTA takes on the role of cinematographer. Unsurprisingly, this may be his best looking film to date. Each frame, motion, and line of dialogue is carefully calculated, nevertheless appearing effortless. Contrary to what the craft may suggest, not everything is so clean in the world of Phantom Thread. The film carries a deliciously sinister feeling throughout, one that presents itself in moments of wicked humour throughout the film, before building to a conclusion that made the Fifty Shades of Grey fan in me intensely satisfied. Do not let yourself be scared off by the prestige nature of the film. Phantom Thread offers what is perhaps the most sinfully fun cinematic experience of the year.

The low-budget shocker doesn't make a lot of sense, but it's terrifying nonetheless.