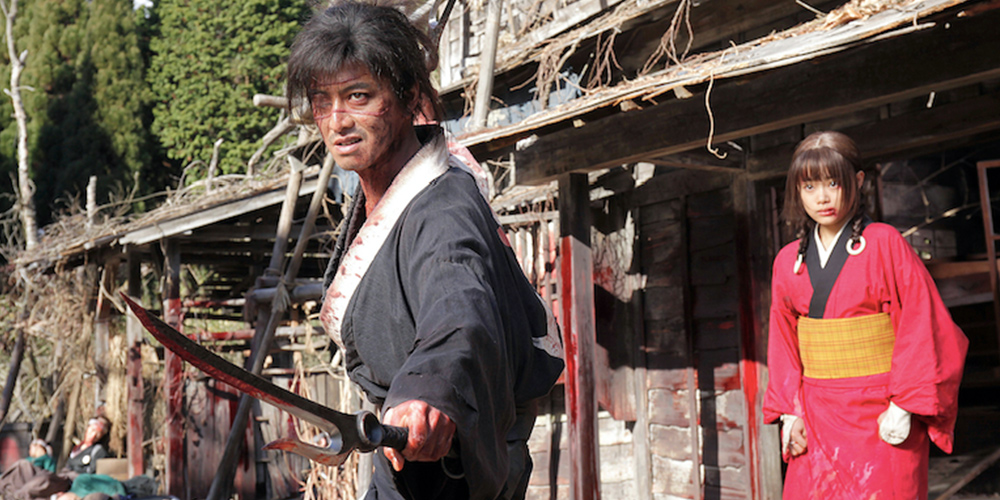 Takashi Miike has only been directing since 1991, but with his unstoppable output, he has already reached his 100th film: Blade of the Immortal. And it does not disappoint. Based on the manga series of the same, the film follows Manji (Takuya Kimura), a samurai who is cursed to never die. After he takes on a massive gang of samurai alone, in an attempt to avenge the death of his sister (a glorious, black and white, introductory sequence), Manji’s pulverized body is fed bloodworms, which then perpetually regenerate him. Indefeatable, he is denied the death he desires. Years later, villainous swordsman Anotsu Kagehisa (Sota Fukushi) works to kill dojo masters in an attempt to create his own supreme dojo. When he kills Rin’s (Hana Sugisaki) father, she enlists the help of Manji in her own avenging mission, and together they track down Anotsu’s disciples, killing them off.

There isn’t much to say about the performances (which are good), or the plot (which is engaging). The style is a welcomed return to Miike’s skilled use of gore and violence in his earlier samurai film, 13 Assassins (which, though made only seven years ago, maintains a distance as Miike has since directed thirteen other films and a television series): a fairly stoic film, Blade of the Immortal is more like that serious historical action-drama. Though not without his trademark humour and gore, the film is less like his shocking Visitor Q or Imprint, and tonally more akin to his 1999 classic horror, Audition.

But while Blade is of an expected quality for Miike (who, admittedly, can bit hit-or-miss, as would be expected from such a massive cinematic output), what is truly revelatory is his use of landscape. The beauty of the way nature is filmed, how it plays with the light of the sun and moon, makes the Japanese countryside as significant as any character within the film. The manner in which Miike uses the scenery as ethereal settings for his story, as well as an integral part of his film, with action working together with the landscapes rather than over it, is as exciting as any swordfight.

By no means is Blade of the Immortal Miike’s best film — he would be hard-pressed to top some of his earlier greats — but it is still a remarkable work from one of the most prolific directors today.

Review: Are You Here