If there’s one thing we learned about the film industry in 2014, it is that the old rules most definitely no longer apply. This was a year of surprises, both good and bad. We lost some incredibly talented people, gained some of the best films in years, and saw the industry challenged in ways we had not imagined. Let’s look back on the top ten stories in film from 2014:

10. It was the year of Bible movies

Biblical films made a comeback this year. Son of God, Noah, Heaven is for Real and Exodus all managed to hold their own at the box office, proving that engaging the church-going crowd is a strong guarantee of audiences for filmmakers. Although Hollywood has only lightly touched on religious themes since The Passion of the Christ in 2004, this recent surge has reminded us why the Bible remains the bestselling book of all time.

9. It was also the year of celebrity dirty laundry

While Hollywood is no stranger to scandal, it seemed as though 2014 was full of especially shocking accusations and confessions from some of the industry’s biggest names. In February, Woody Allen’s adopted daughter Dylan wrote an open letter detailing the sexual abuse she endured from the filmmaker as a child. In April, X-Men director Bryan Singer was accused of sexually assaulting a man for several years when he was a teen, promising him Hollywood fame. In October, everyone’s favourite TV reverend, Stephen Collins, became the centre of a media frenzy as he was secretly taped confessing that he molested several young girls in the 70’s. In November, allegations from several women began surfacing regarding accusations that they had been sexually abused by comedian Bill Cosby.

8. The world gets Frozen fever

Despite its November 2013 release, this adorable family flick gained incredible momentum in 2014. This year, Frozen became the top-grossing animated film ever, bringing in $1.219 billion at the box office. But that was just the beginning. The film also sold 3.2 million DVDs on its first day and won an Oscar for the ridiculously catchy ‘Let It Go’. The Frozen franchise has made over $1 billion U.S. and Frozen products have flown off shelves so quickly that many parents have had no choice but to go on eBay, bidding up to $1,500.00 on costumes for their little Elsa or Anna. Even a year later, Frozen products were one of the hottest gift lines of the Christmas season.

In February, at just 46 years of age, Oscar winner Philip Seymour Hoffman was found dead from a drug overdose. The world lost one of the great actors of our generation, best known for his roles in Capote, Charlie Wilsons War, Doubt, and one of his final roles, as Plutarch Heavensbee in The Hunger Games. The father of three struggled with drug and alcohol addiction for decades, but was said to have been improving prior to his tragic death.

6. Boyhood: A surprise twelve years in the making

It’s always refreshing to see filmmakers take risks, and even better when those risks pay off. Such was the case for Richard Linklater’s masterpiece, Boyhood. Although the film had a simple premise, a coming-of-age story, it left audiences awestruck and critics calling it the best film of the year. Starring Ethan Hawke, Patricia Arquette, newcomer Ellar Coltrane and Linklater’s own daughter, Lorelai, the movie follows the evolution of one family as they navigate the many obstacles of growing up. Linklater filmed in increments over the course of twelve years, allowing the characters to age in real time, creating a powerful and lasting effect that audiences had never seen before. He allowed the plot to develop over the years, mirroring the real life events of Coltrane, resulting in a rich storyline that truly captures the profound and the nuanced dimensions of lives unfolding. 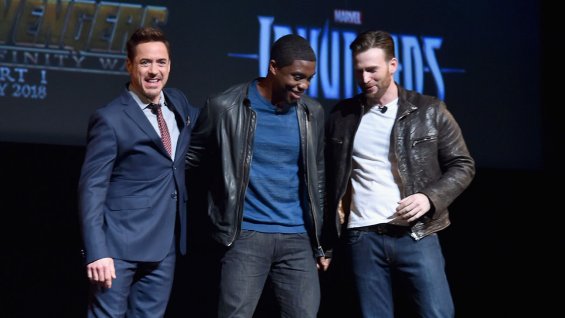 In October, Marvel announced that with its Phase Three, the Marvel Cinematic Universe will grow bigger than fans could ever have imagined. The announcement included the titles and release dates of every Marvel movie from now until May 2019, promising audiences the return of many favourite characters, as well as several other heroes making their big screen debut! While there was already great buzz surrounding the upcoming sequels to Captain America, Thor, Avengers and Guardians of the Galaxy franchises, fans were surprised to learn details on films starring Black Panther, Captain Marvel, Doctor Strange and the Inhumans.

Millions of Star Wars fans went wild as the highly anticipated trailer for the latest franchise installment was released both online and in 30 North American theatres this past November. The 88 second teaser trailer received more than 40 million YouTube views in 72 hours, with the majority of fan feedback being positive. The Force Awakens is set 30 years post-Return of the Jedi, and features original Star Wars actors. With this much hype for a trailer, we can only imagine the fan frenzy that the film will garner when it is released December 2015.

In August, the world mourned the loss of one of the most beloved actor/comedians in history, Robin Williams. The Academy Award-winner was only 63 when he took his own life in his California home. Williams, best known for iconic roles in films such as Good Morning, Vietnam, Dead Poet’s Society, Aladdin, Good Will Hunting, Mrs.Doubtfire, and dozens more, had a history of depression and struggled with addiction for decades. His death had a profound effect on his millions of fans, leaving behind a legacy of wild inventiveness, energy and laughter.

Netflix threw an exhibition curveball this year when they announced that Crouching Tiger, Hidden Dragon 2 would be released simultaneously in IMAX and Netflix, a first for both companies. This caused an uproar for exhibition companies, many stating they would not participate in day and date releases and would not screen the film in theatres under these circumstances. This controversy led to the question of Netflix’s role in the future of film. Will this become a trend for 2015? Adam Sandler’s four film deal with Netflix seems to indicate that we may be moving away from traditional film releases.

1. Sony Pictures Entertainment and The Interview

The events surrounding Sony Picture’s The Interview may have created a cult classic, and will forever be remembered as a catalyst for a new chapter in film exhibition. A satiric poke at an assassination of a leader of North Korea named Kim Jong-un, The Interview became the centre of controversy in the weeks approaching its release. A massive hack of Sony’s computers led to a chilling message from a group called “Guardians of Peace” threatening any exhibition companies who might show the film on its Christmas Day release date. In light of these events, North America’s top theatre chains chose to pull the film. Only hours later, Sony announced they were cancelling the release entirely. Sony became the centre of a media frenzy, fans were outraged, and an industry was riddled with questions about the end of free speech and artistic expression. Nonetheless, by Christmas Day, the film was released in a number of independent theatres and simultaneously made available online, a tactic typically frowned upon in the exhibition industry. Whatever your stance may be on the issue, it’s clear that the 2014 Sony hack shook up the world and potentially changed the way the film industry will operate in the future.

6 Interesting Facts about NEED FOR SPEED

5 reasons to pick up a Game of Thrones Steelbook

5 reasons to pick up Season 5 of Game of Thrones

Six Things We Learned From the Batman vs Superman Set Photo