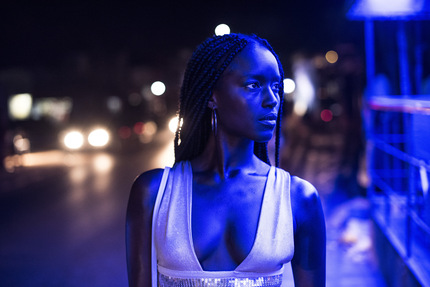 Following previous TIFF selections Ex Drummer (07) and 22nd of May (10), Belgian director Koen Mortier returns to the Festival with Un Ange, an atmospheric and disjunctive film about two people from different worlds whose paths cross for one brief but unforgettable encounter.

Fae (Fatou N’Diaye) is a Sengalese sex worker. Thierry (Vincent Rottiers) is a Belgian cyclist. After suffering a tragic fall during the Tour de France he heads to Dakar with his brother for a holiday, and although he is initially hesitant about exploring the local sex trade (he states he needs to be in love to make love), Thierry finds himself attracted to Fae from the moment the two cross paths. In her he finds someone to distract him from his disgraces, from his anger, and from the drugs which he relies on. In him she finds someone who can lift her up — from poverty, from lovelessness. And yet, as the two go about their night together, and as Thierry spirals more and more out of control, their fateful encounter becomes anything but idyllic, leading both to question whether it is truly possible to find redemption in affection.

Shot in bold reds, greens, and blues, and punctuated by elliptical cuts that weave together disparate times and points of view, Un Ange attempts to tell a story of virtue and vice, of love and fantasy, with an impressionistic energy reminiscent of Bertrand Bonello. However, in his task Mortier ultimately falls short. For his vision is deflated by an overwrought script; his intimate scenes are overwhelmed by their operatic score; and his narrative is diluted by a number of shocking suicide fantasies which, despite being stand-ins for Thierry’s impotence, remain too ill-defined and disorienting to be regarded as anything but distracting. The result is a visually striking yet experientially tepid film with little depth.