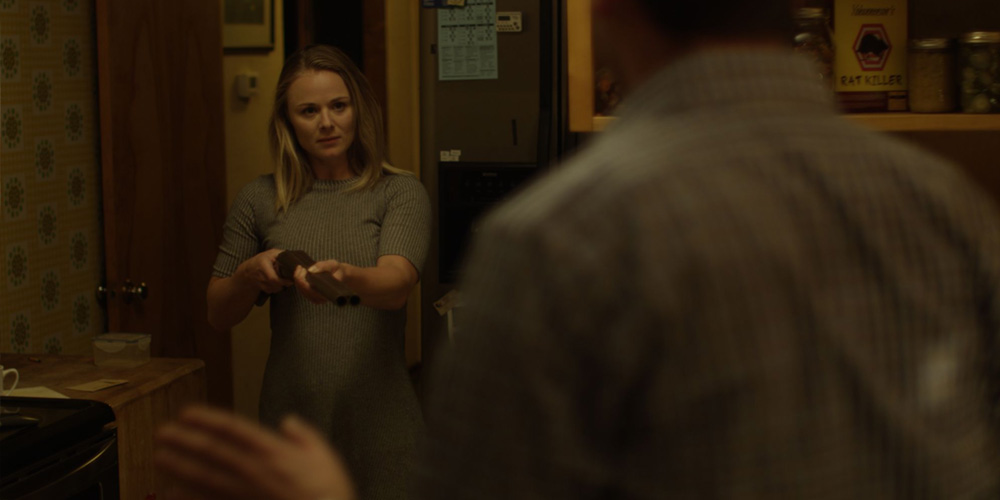 In a scene reminiscent of Basic Instinct, the icy blonde Agnes (Lora Burke) sits across from the cocky Mike (Robert Notman), crossing her legs to reveal her thigh, her indifferent confidence masking her crimes while he never realizes how out of his depths he truly is. Navin Ramaswaran seems inspired by the erotic thriller for Poor Agnes, to craft a narrative about a powerful murderess. In his film, Agnes is a serial killer who seduces men and traps them in her home, physically and psychologically abusing them while manipulating them sexually. A reversal of the usual story of a male killer, the film leaves a lot to be desired. Unlike the potential for disruptive empowerment of Basic Instict, Poor Agnes does little more than emphasize misogyny in its impulsive fear of the feminine.

“What if the killer was a woman?” is hardly enough to carry a well-made film. But banking on its use of subversion, Poor Agnes is never truly subversive: it is simply a mirror. While changing the typical killer from man to woman, the film has nothing to say. Over-relying on this switch, Ramaswaran seems to ignore the poor performances from his lead actors (and their incredible lack of chemistry or charisma), the general absence of tension, and bland cinematography.

With only the mirror of male killers being its draw, the film runs into problems when this mirror becomes misogyny. Agnes’ power is constantly sexualized. While she attacks the men who objectify her, no one stops Ramaswaran from eroticizing her image. Agnes’ motivation is slight, with brief monologues about achieving God-like power through violence against other humans — an intriguing concept, which is underdeveloped, and never enough to distract from the film’s sexism, where Agnes is feared as a woman, and attacks as a woman. Agnes is defined in relation to the men in her life, but the element of gendered violence is never truly brought up, save a trauma group therapy session where Agnes denies that she was assaulted and torments other survivors. As quickly as it is brought up, it is dropped, and the film’s focus returns to the victimization of men at the hands of the scarily sexy woman who can only be stopped by solidarity with other men.

This mindless, sexist villain is uninspired. Unable to even create a basic but pure reversal, Ramaswaran makes his killer a “woman,” which is to say her role revolves around her appeal to men, without a critical gaze. But without a single feature film at Toronto After Dark being directed by a woman, Poor Agnes‘ complete, unquestioned, objectifying fear of women and love of brotherhood unfortunately seems to fit in to the festival far too comfortably.

Review: Wish I Was Here