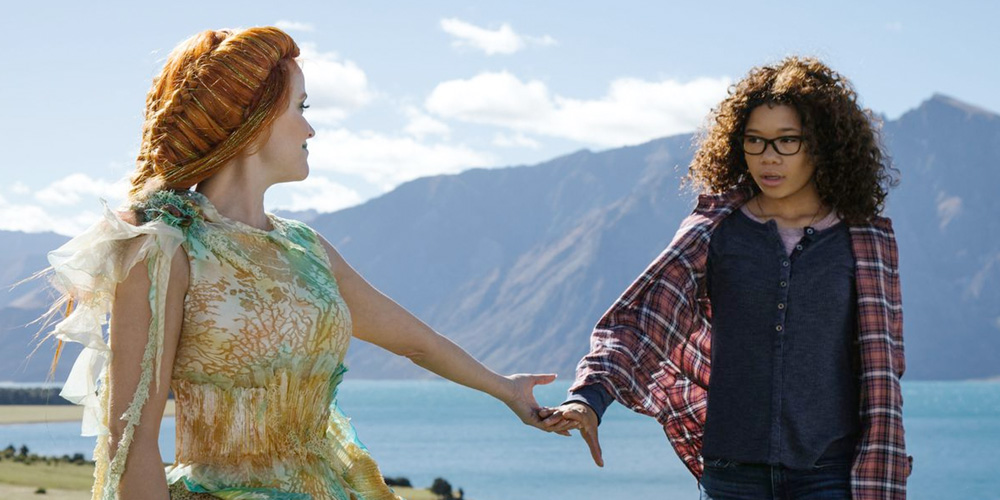 A Wrinkle in Time is a difficult film to discuss. With so much going for it, it equally has a host of issues that hold it back, regardless of how much we want it to succeed. The latest film from director Ava DuVernay stars Storm Reid as Meg Murray, a young girl struggling after the disappearance of her scientist father (Chris Pine). Her whimsical younger brother Charles Wallace (Deric McCabe) introduces her to a Mrs. Whatsit, Mrs. Who, and Mrs. Which (Reese Witherspoon, Mindy Kaling, and Oprah, respectively), and together with their neighborhood friend Calvin (Levi Miller), the trio begin a journey through the universe to rescue their father.

In some ways, the plot seems somewhat slight. The children go through a series of events which each seem inconsequential, never necessarily developing, and each one feeling as though it would not be missed had it been cut. A journey to a lush field, a beach, a suburb, or a cavern, each demonstrates some visual flair, but little to forward the plot beyond padding out the film.

The film is still well directed: the pacing is good, and DuVernay never bores with her extensive world-building — it’s just never quite enough. Disappointingly, the segments feel so lacking because they should have been more alluring to the eye. Instead, they feel uninspired — paired with this are the costumes, which all look like they have come from the losing contestant on a Project Runway avant-garde challenge. The glorious spectacle of the universe is thus sadly ineffective.

But even if the adventure can feel flat, and the look a bit dull, what stands out is the role of Meg. Reid’s performance is the film’s standout as she brings life to such a fully rounded character. It is refreshing to see a girl who encompasses both difficult and admirable traits, one who comes to terms with her faults and finds self-acceptance. DuVernay has lovingly crafted Meg in  a way which is significant and caring: her representation is important.

So despite its faults, one can’t deny that A Wrinkle in Time is effective. Through its protagonist it creates a moving, emotional drama. That drama is more effective than its science fiction, but that doesn’t mean it’s not an inclusive, deeply perceptive, and deservedly uplifting, coming of age story.

Review: Teenage Mutant Ninja Turtles: Out of the Shadows

A stale and sterile addiction drama that does justice to the memoirs from which it is adapted, but not to the communities which it tries so hard to represent.