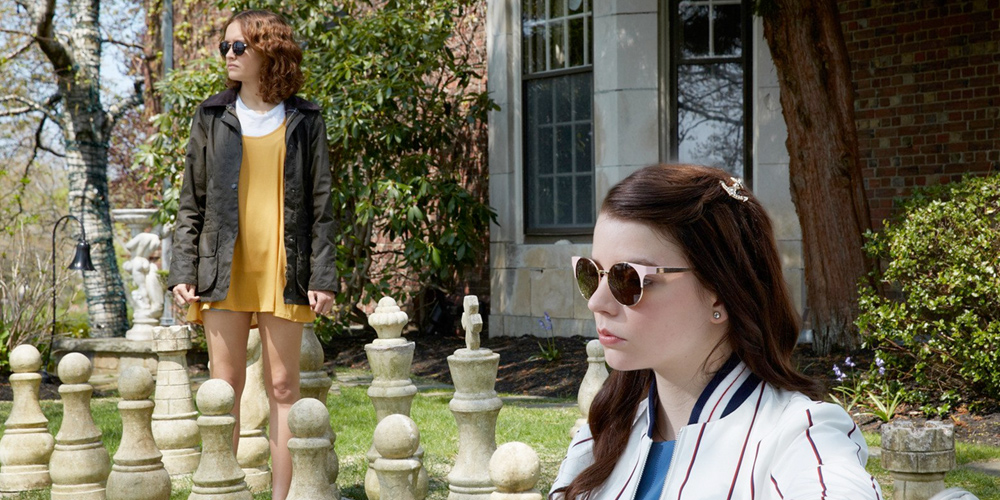 In writer/director Cory Finley’s feature film directorial debut he takes on the elitist society of rich and privileged children through the collaboration of two teen girls with deep seeded issues and dark desires in Thoroughbreds. The film, which has garnered raves since it’s debut at 2017’s Sundance Film Festival, features the emergence of a strong new voice behind the camera, and a great, yet unfortunately last, performance from an actor of great talent in Anton Yelchin in front of it.

Lily (Anya Taylor-Joy) is coerced into tutoring an old friend that she has fallen out of touch with in Amanda (Olivia Cooke) by Amanda’s mother who would like to see them reconcile after an incident occurs that frames Olivia as ‘unstable’. Lily is seen a well adjusted and ‘normal’ while Amanda feels no emotions whatsoever, despite being on myriad of prescriptions for the multitude of illness that have been prescribed to explain her emotionless existence. But it is soon revealed that Lily, who keeps her abundant emotion bottled up under a prim and proper exterior, has a volatile relationship with her step father Mark (Paul Sparks) that Amanda uses to break through her exterior. Soon the pair are hatching a plan for Mark’s demise, but as things unravel plans go astray one extreme and desperate decision will affect the lives of everyone involved.

With both young actresses having come off performances that launched them career wise, Taylor-Joy with The VVitch and Split and Cooke in Me, Earl and the Dying Girl and TV’s Bates Motel, Thoroughbreds is set to be their breakout, if only based on their next projects. But with Cooke staring in Spielberg’s Ready Player One later this month and Taylor-Joy joining the Marvel Universe in The New Mutants next year, it will be important to remember just how great they both are in this film. Taylor-Joy keeps her interpretation of Lily with a firm façade, only to completely break down in the films final moments once the last act has played out. And Cooke is mesmerizing in her unflinching portrayal of Amanda, a character that is far more than a one note delinquent, with an incisive wit and wisdom that comes from having all emotional context her Amanda silently jackhammers away at Lily’s projected confidence in a way that no other character in the film seems capable of. Both performances are outstanding and deserving of high praise indeed.

The supporting cast, for the little that they are involved, are solid as well. Lead by the unnerving and sometimes menacing performance Sparks turns in as Mark, a true money and looks obsessed slimeball of the highest order, who immediately assumes a combative relationship with Amanda once she is introduced into his life. In fact, the acidic conversations between Cooke and Sparks in character are among some of the wittiest and smartest dialogue in the entire film. The mothers in the story are mainly reduced to plot forwarding window dressing here, but there are a few good scenes between Taylor-Joy and Francie Swift that further the plot between Lily and Mark nicely. Yelchin is great as well in a lowlife drug dealer with high ambitions role, the type of person who speaks about lofty future conquests while still dealing to high school aged kids and sneaking into their parties, so he can stay under the radar of any real drug dealers. It’s a befitting footnote to man that he is again playing against type here, something he was know for doing over most of career quite well.

Finley’s script and direction are on point here, as the film does not fall nicely into any pre-existing category or descriptive set and manages to keep the viewer guessing the end game all the way up to the end.  Finley’s camera remains static through most of the film, not because of lack of interest or experience mind you, but mainly due to it maintaining an unwavering focus on his two impressive leads. Finely allows the performances of Taylor-Joy and Cooke to be what draws the audience in as opposed to how the film is shot, mind you the film still looks gorgeous as the high class setting of the film allows for some extravagant backdrops to the proceedings.

Thoroughbreds will always carry the distinction of holding the last performance on film of Yelchin, but ultimately should also be remembered as the film that launched Taylor-Joy, Cooke and Finley towards the stratosphere. It’s a highly original and distinctive film that is should easily remains among the best of the year once 2018 starts to wind down.