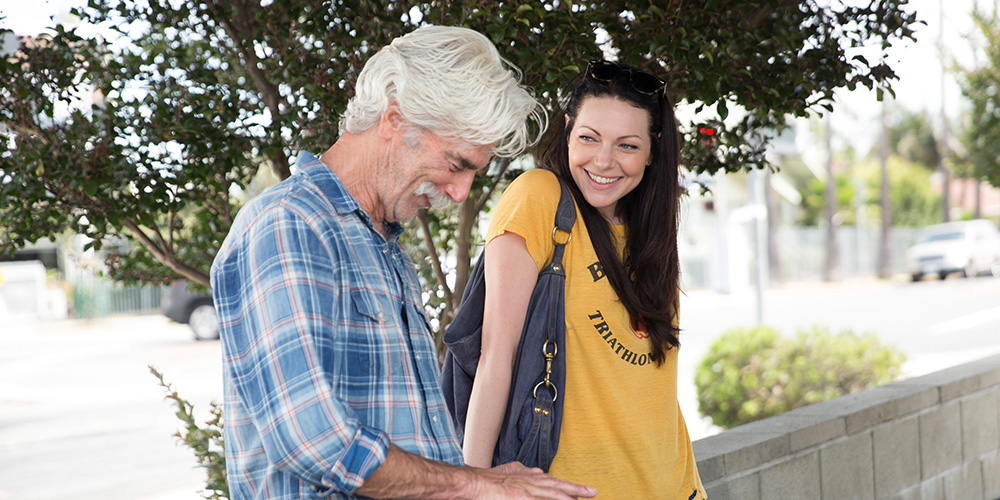 Aging Western actor Lee (Sam Elliott) is dying, and has given up on the time he has left to live.  At 71 years of age, he is distanced from his ex-wife and neglected adult daughter.  He rarely works and instead spends his time smoking weed and reminiscing.  By chance, Lee meets young stand-up comedian Charlotte (Laura Prepon).  For unknown reasons, the thirty-something Charlotte falls for the elderly has-been, and magically reinvigorates every part of Lee’s life without ever gaining a character trait that does not revolve around him.

There are many problems with The Hero, the latest film from director Brett Haley: Charlotte’s two-dimensionality is only the beginning.  A significant character to the film, she is never really a character, but is a plot point to drive Lee.  She excites him, encourages him, hurts him, heals him, all so that he may work through his psychological issues, pushing forward the narrative.  Charlotte takes up whatever role Lee requires.  When he needs to be shaken up, she is the wild party girl.  When he needs to be betrayed, she is the empty bitch.  And when he needs to grow, she becomes the supporting domestic.  At no point does Charlotte become a person in her own right (even her stand-up routine is based off of her day with Lee), and though for a moment there is the question of why a very young woman would be interested in a sad old stoner, as he is described in the film, that question is left unanswered.

It feels lazy to have another film about a manic pixie dream girl being able to save a brooding hero from the sadness of life.  Unfortunately, that’s not all that’s lazy in The Hero.  The humour is cheap, mainly stoner jokes which often rely on the simple presence of drugs for laughs.  The dialogue is painfully embarrassing, often attempting complexity and depth but attaining cliché.  The existential crisis which Lee goes through is nauseating as it becomes a mess of aphorisms and melodramatic metaphors.  The constant one-liners, meant to be cutting and emotionally revelatory, reek of juvenile attempts at edginess.

While Elliott gives an extremely strong, and quite moving, performance as a man dealing with the crises of age and existence, it is not nearly enough to save this otherwise laughable film of sexist stereotypes, dull comedy, and amateurish sentimentality.  A bloated film constructed from the most base ideas which are then articulated with absolutely no grace or intelligence, The Hero is a thoroughly unenjoyable watch.