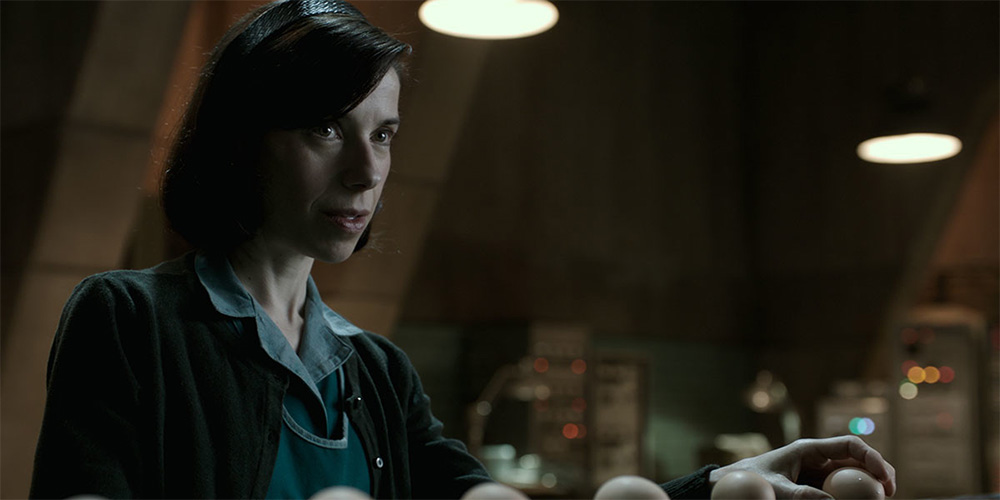 Review: The Shape of Water

The Shape of Water is director Guillermo del Toro’s beautiful, novel take on a familiar story which shows off all of the famed director’s filmmaking and storytelling proficiency. Del Toro creates a world impeccably detailed and believable but full of fantasy as he nimbly balances cold war espionage and fairy tale romance along with elements of film noir, musicals, and classic monster pictures.

The film is set in the 1960s against the backdrop of the Cold War. Elisa (a remarkable and mostly silent Sally Hawkins) works nights at a covert Cold War lab with her coworker and friend, Zelda (Octavia Spencer). Beyond the lab, seemingly the only other person in Elisa’s life is Giles (Richard Jenkins), an artist who lives next door.

During one of her shifts, a new amphibian-like “asset” is brought into the facility for research. The asset has gills and legs and isn’t dissimilar to del Toro’s creation of the past, Abe Sapian (both played by the underappreciated Doug Jones). The asset is obviously not human but very clearly has a heart and soul, not to mention a kind temperament. Despite not being an obvious threat to anyone, the asset has an enemy in Richard Strickland (Michael Shannan), who heads the research operation and has no issue cruelty or abuse if it means gaining an edge on the Soviets.

Like Elisa, the asset is an outsider and also unable to communicate orally. Whatever barriers exist between the two, communication related or otherwise, Elisa develops an intimate bond with the amphibian-man and so begins the most uncommon of love stories. With the asset in danger, Elisa is forced to assemble a plan to keep the ambition man and their relationship alive. Through the treatment of Elisa and the asset, the film has a lot to say about the human condition and bigotry, along with a number of other thoughtful, often dark themes which ware cleverly woven into the fable.

For all the magic and wonder del Toro conjures up on-screen, there are a mere few moments that can be described as weird or startling, which is both surprising, given the characters and central love story, but also expected, given the rather traditional parameters del Toro is working within. It’s a minor grievance in the context of a film this good, but perhaps is the main reason why it isn’t quite great. Del Toro is comfortable delivering The Shape of Water as a masterful mix of styles and genres, but seems less willing to embrace the inherent weirdness of the story and break free of the streamlined fable narrative.

Despite its limitations, The Shape of Water is del Toro’s best and most thoroughly engrossing work since Pan’s Labyrinth and will surely draw attention during award season. The performances, direction, and visual artistry that make Water such a success reveal just how easily a story this wild could have fallen apart in less capable hands. As is the case with most of del Toro’s work, nobody else could have made this movie. And what more could an auteur ask for, than that?

Review: (Dis)Honesty: The Truth About Lies