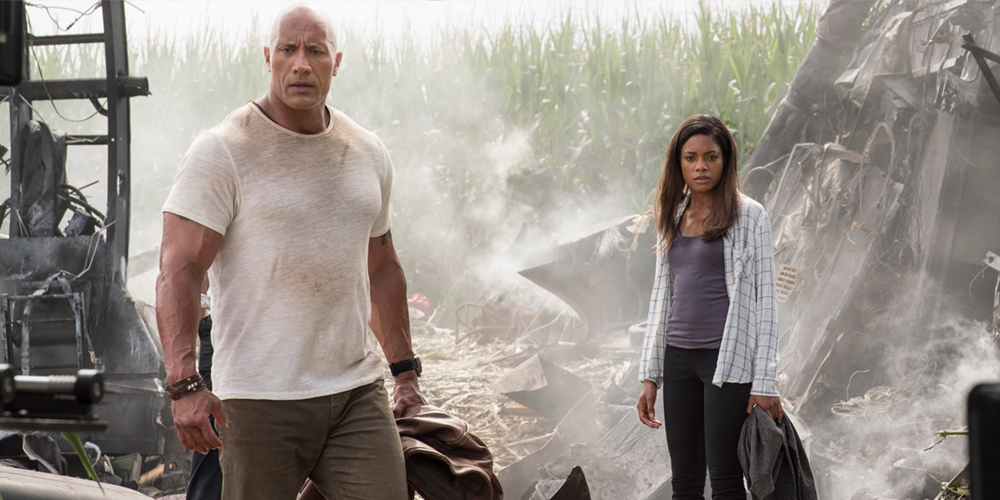 Rampage is a film that should never be good. The premise — an action movie based on a 1980’s video game where over-sized monsters are attacked by the military — seems destined to fail. How could that thin, formulaic plot be interesting? How could the exploitation of the nostalgia value and nerd cred of a retro game be anything but a transparent cash grab? How could all this together function as anything vaguely appealing to audiences? Yet, somehow, it works.

Dwayne Johnson stars as Davis Okoye, a primatologist who prefers gorillas to people, particularly one named George, who he has bonded with. When the cartoonishly evil Energyne corporation meteors their DNA-editing experiment to Earth (they had been working secretly in space to avoid any terrestrial legal conflicts, naturally), George is infected, and begins mutating into a much larger and more aggressive version of himself. As George, along with an infected, and now super-sized, wolf and dinosaur (of sorts) rampage their way through cities, Davis teams up with Dr. Kate Caldwell (Naomi Harris), an ex-Energyne employee who has the drive and the knowledge to put a stop to the corporation.

A lot of Rampage is fairly shallow. Characters start out as flat types (Davis is the brawn to Kate’s brains, the villains are nothing but villains, etc). The plot seems to be little more than a spectacle of giant animals smashing things. In sum, Rampage is cutting to the chase: presenting something easy to digest and fun, without anything to make you stop and think.

But the film does flesh itself out. The conflict of corporation vs. humanity is simplistic, but it does afford a discussion of basic ethics with animals acting out human fears and revolution, while Davis becomes a well-rounded figure beyond his misanthropy and muscles, demonstrating sensitivity and depth as he comes to terms with George’s painful transformation. This, refreshingly, brings life to the otherwise very straightforward action film. Rampage is by no means perfect, but it hits to mark for easy entertainment, made with a sense of care and earnestness which make it feel fresh and exciting.

Movie Review: Rise of the Guardians

Review: This Is The End