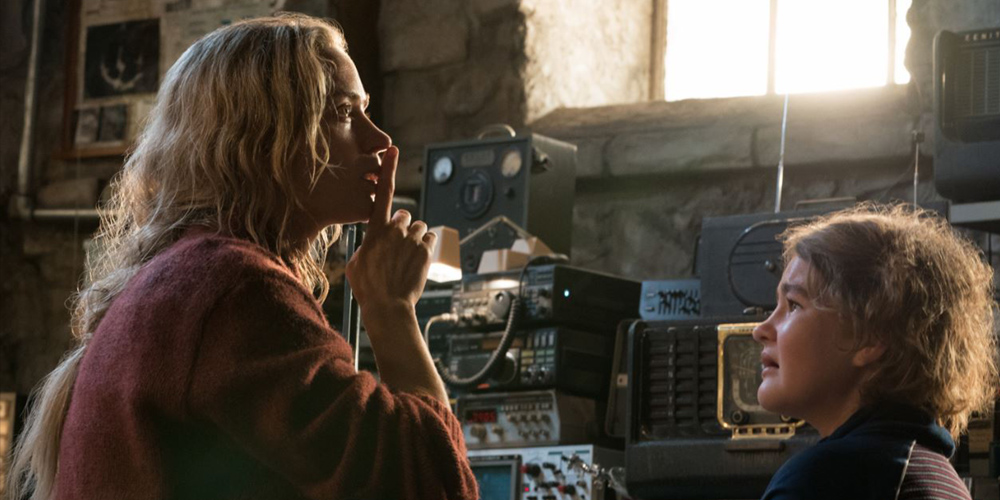 As a filmmaker you aim to bring the audience into your world. It’s the ultimate achievement to suspend people in a moment where you are there with your on screen characters, a feeling that A Quiet Place pulls you into within moments.

We’re introduced to the Abbott family, who have adapted to life in a dystopian 2020 where people are terrorized by blind aliens who hunt based on sound. The family is made up of Lee and Evelyn, parents of two children Marcus and Regan, who is deaf. Every measure is taken to limit the output of sound in their daily lives from conversations in sign language, soft contact game pieces to sand covered walkways. The isolated family is attempting to move forward in a world where to hear a sound is terror itself.

A Quiet Place is Krasinski’s third directorial effort and his first studio production. His work here displays an understanding of cinema beyond the body of work he has to represent himself. Everything in this picture is handled masterfully. The films gripping set pieces bring viewers from one anxiety inducing situation to another in a way that is reminiscent of classic horror offerings like John Carpenter’s Halloween, and once it starts it doesn’t let up.

The terror builds up layer by layer, but the base is the sound design. The film’s use of silence is the thing that brings you into the situation with our players. In the theater a collective unease can be felt as you wade through room tones, until that inevitable moment when the silence is broken. It’s basic use of our senses to create a commonality between the viewer and the audience is a welcomed change in to the studio driven horror film jump scare. This film isn’t just using sound design to make you jump for a second, it lays a base of fear and keeps you there.

Furthermore, Krasinski’s classical use of camera motion to compose terror is a gift to modern horror. The cinematography in the film is beautifully handled as a storytelling device, and not just pretty imagery. The film feels like it’s coming from a artful studio like A24 as opposed to Paramount.

The Abbott parents are played by real life couple/mom and dad John Krasinski and Emily Blunt. These two display their natural chemistry with ease, and while the script doesn’t allow much room for Krasinski’s character to be explored, their devotion to the safe keeping of their children is felt. The issues in regards to acting come in with the interactions between Krasinski specifically and his daughter Regan, played by Millicent Simmonds who is hearing impaired in real life. Their dialogue stumbles as it goes through the typical Father/Daughter paradigms. The chemistry is forced and scenes between them pale in comparison to all other family interactions on screen. It hurts the film a lot because their relationship is a central element to the narrative and the central theme, being a parent.

A Quiet Place is unlike any other modern horror out there. It’s equal parts drama and sci fi, but most importantly it manages to be a truly human story. Krasinski has created a film that’s more here than aliens and scares – there’s family, loss, and above all hope. He has also laid down his mark as something much more than a promising filmmaker. He’s a director everyone should be watching.