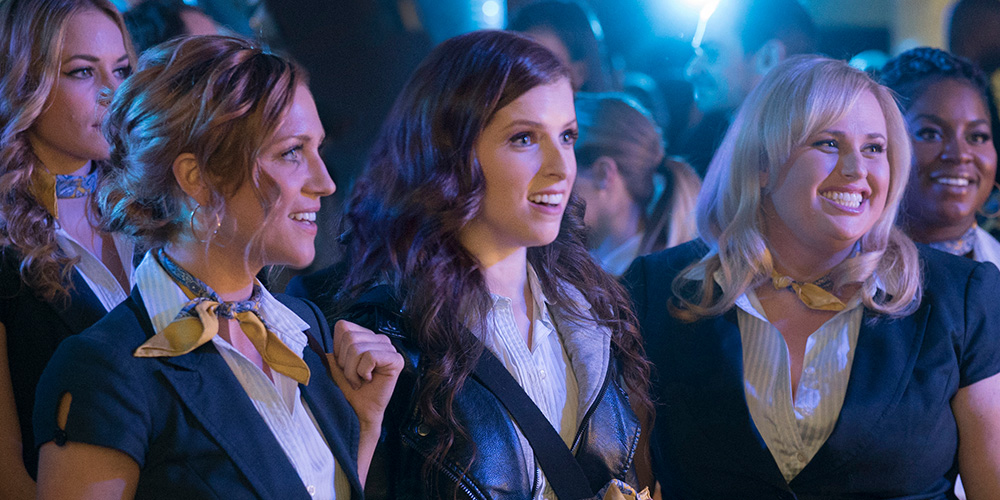 The pitch has gone as the trilogy ends on a down note. This final entry is far from perfect.

Back in 2012, the first Pitch Perfect film arrived flying mainly under the radar as star Anna Kendrick was delivering her first lead performance after stellar supporting turns in films like Up in the Air, 50/50 and Scott Pilgrim vs The World (not to mention her reoccurring blink and you’ll miss it role in the Twilight films). A utterly charming result meant the film succeeded beyond expectations and has spawned 2 sequels- the second of which opens in theatres today. This time the directing duties fall to Trish Sie, known mainly for directing some eye-popping OK GO music videos. But much like her Step Up All In had her come aboard and direct the weakest entry in the series, the results here are the same, though the script for this film did her no favours.

The film revolves around the now mid 20’s former Barden University Bellas all apparently leading meandering and disappointingly “adult” lives now that they have all graduated. A invitation to watch the current Bellas perform is mistaken as a chance for the girls to reunite and sing again, but gets all the girls together where they launch a plan to join a USO tour since they can all just leave their lives behind at the drop of a hat. Of course, somehow the tour turns into a competition and the Bellas are out to win yet again.

Pitch Perfect 3 sadly only works sporadically as the film retreads over all to familiar territory. Why this had to turn into yet another contest to win for the Bellas and not a film that we can just spend time with characters we have grown to love is disheartening. Kendrick is not completely checked out here, but you can clearly tell that she is merely there because she loves her costars and made a tidy sum to finish off the series. Rebel Wilson seems to have been told to just do whatever she wants and her character of Fat Amy goes completely off the rails. It doesn’t help that her character is sucked into a side plot that is one of the worst things on film this year, but I’ll talk more about that in a bit. The saving grace here is the other girls, specifically Chrissie Fit’s Flo, Kelley Jackle and Shelley Regner as Jessica and Ashley and the always scene stealing Hana Mae Lee as Lilly, all of whom deliver a few big laughs along the way. But the stalwarts of the series for uproarious laughter have been the commentating team of John Michael Higgins and Elizabeth Banks. This time out though the jokes all miss the mark and you can practically see them eyeing the exit door every time they are on screen. Gone entirely are Skylar Astin’s Jesse, Ben Platt’s Benji and Adam Devine’s Bumper (though based on how poorly Bumper was used in part 2 this may be for the better) as all the former flames for the girls are completely written out of this one.

The script for this film is terribly derivative as Kendrick’s Becca has the exact same story to play out as she did in the second film and the rest of the girls are just squandered. Particularly hurt is Brittany Snow’s Chloe, a steady stream of laughs in the first film, who is regulated to a half baked romance with her Army escort on the tour. But the biggest flaw comes in the form of a subplot involving John Lithgow playing Fat Amy’s estranged father who shows up trying to con his little girl out of millions of dollars she is unaware she has. It’s poorly written and Lithgow knows it, phoning in a ridiculous performance from the second he arrives on screen. The saga ends with a mass kidnapping out of a really bad 80’s film and Fat Amy blowing up a yacht in one of the most preposterous action sequences committed to film this year. And sadly that fight scene is pretty much the funniest Wilson’s character is for the film. And there’s really no need to mention the other bands in this competition either as after the first 3rd of the film they practically disappear.

It’s a sad send off for a series that first succeeded despite its perceived limitations. The film is not a complete waste mind you, there are flashes of former glory, but to use the vernacular of the films themselves, most fans are bound to find the end result of Pitch Perfect 3 is aca-disapointing.