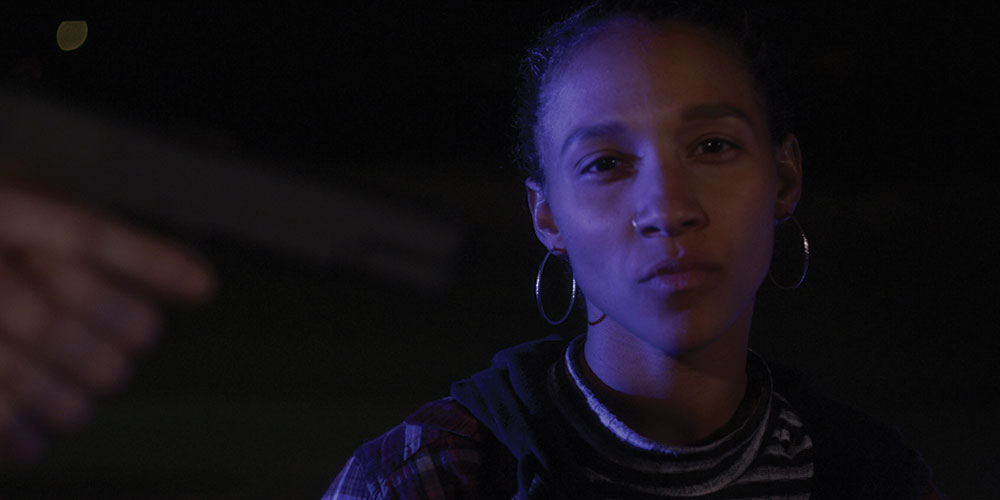 My Name is Myeisha is a musical drama adapted from the stage play Dreamscape. The story is based on the police shooting of Tyisha Miller, with the film centred around the moment the lead character Myeisha is about to get shot. The film takes us out of the moment and into the mind of Myeisha as she contemplates both the events happening and her life in retrospect. She spends most of the film narrating directly to the camera in a spoken word rap hybrid. The film is best described as experimental, the experiment being: how little can we bother changing the play?

The film holds on to its source material for dear life, rather than making any drastic changes for the film medium. It might be a fresh approach, but My Name is Myeisha would have benefitted from meeting the conventions of a film at least halfway. The most impactful parts were small moments of realism at the beginning and end that took a grittier, rawer tone. The movie does a good job of humanising the issue of police shootings, but it could have used more realism and a less word-for-word adaptation of the play in order to achieve a lasting impact.

The story focuses around Myeisha’s experience of the moment before she is shot, and takes tangents as she contemplates her life. This would be more effective if the tangents had a stronger link to the event, or we saw more of the moments leading up to it. The back story we see feels unrelated to the event and there is no cause and effect, so the film feels lacking in plot and overflowing with needless diversions. We would also benefit from seeing more perspectives outside of Myeisha’s mind to break up the constant direct addresses. Instead, we get plenty of repeated dialogue and refrains that make it more grating than it should be.

With all this talking to the audience, the lead actress, Rhaechyl Walker, has a tough job. She spends around 90% of the screen time alone and looking straight at the camera. She was a safe choice for the part, having played the role in the play before, but her style of acting still reads as theatrical. Some more subtlety and naturalism would have helped bring Myeisha to life more. To make her job even harder, she also has to sing, dance and rap in her performance – but she executes these elements well.

The visuals of the film are fun but, like the tangents the film takes, they are eclectic. Shots of Myeisha switch from her in one place to another as she talks continuously, an effect which is fun when it isn’t overused. With the shots jumping from place to place, the film shifts styles: black and white, a daylight scene with an orange hue, Myeisha’s face brightly lit with moving backgrounds, her face shadowed in dark moody lighting. All these styles are well executed, but some consistency would have been nice. A consistent colour palette at least, so we don’t feel like we’re jumping into other films.

Overall, My Name Is Myiesha is a film with its heart in the right place, but ultimately it doesn’t make the changes needed to stand alone from the stage play it was adapted from.