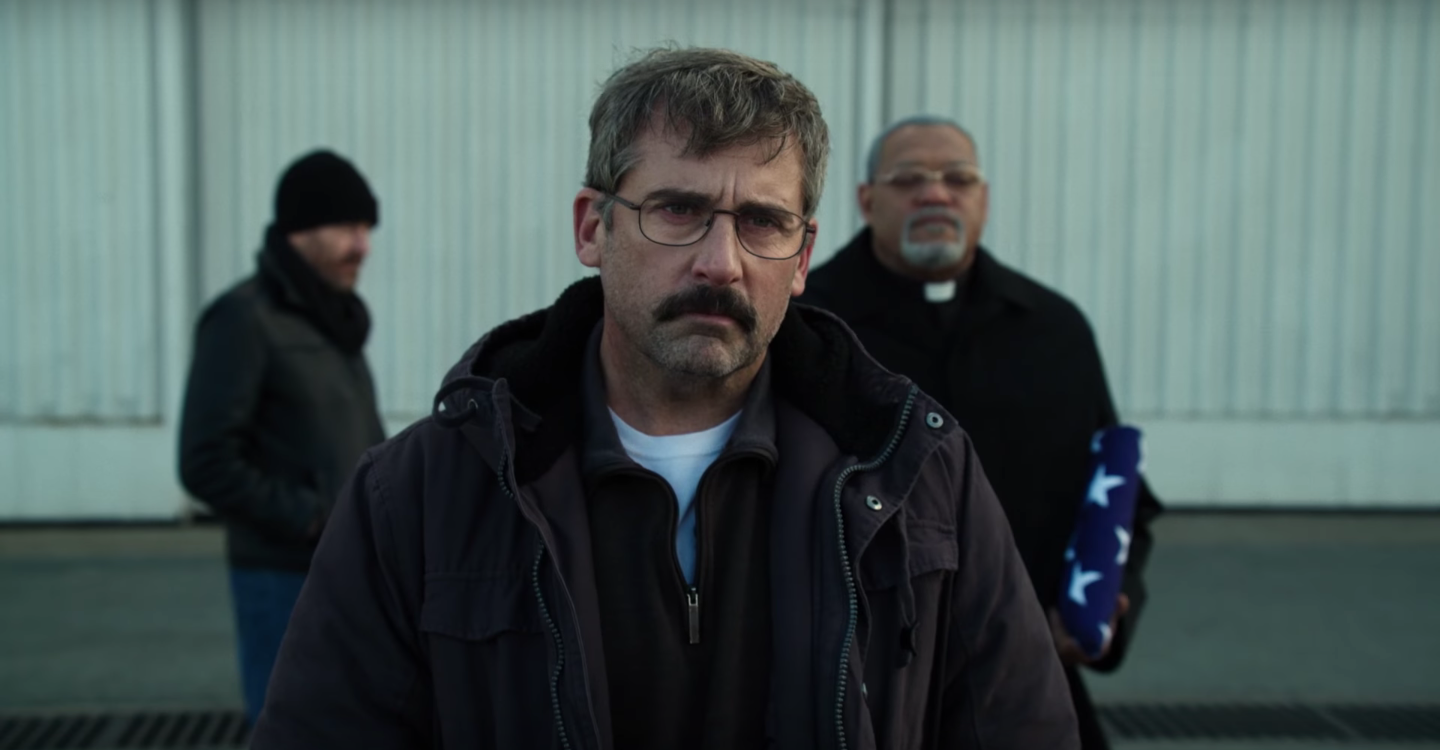 In 1973, beloved American auteur Hal Ashby (Being There, Harold and Maude) released his film The Last Detail. The film starred an electric Jack Nicholson as disgraced Naval officer Buddusky. Otis Young and Randy Quaid co-star as Mulhall and Meadows. These two officers are tasked with taking Buddusky to prison, yet take pity on him and decide to show him a good time before putting him away. The film sort of faded into the background of the American New Wave, going mostly unmentioned in the past couple decades. Thus, Richard Linklater’s decision to make a sequel to the film seemed rather obscure, unwanted, and entirely unnecessary upon its announcement. Last Flag Flying reunites the film’s protagonists in 2003, with Steve Carell, Bryan Cranston, and Laurence Fishburne resuming the roles of Buddusky, Mulhall, and Meadows. The result is a surprisingly heartfelt film that stands completely on its own from Ashby’s classic.

The three men have not seen each other since the detainment of Buddusky (Carell), which is why Meadows (Cranston) does not initially recognize him when he stumbles into his bar some thirty years later. Buddusky’s son has been killed in the Iraq War and Buddusky is calling on the men he spent a legendary afternoon with to join him at the burial. Easily convinced, Meadows, puzzled, follows Buddusky to a gospel church, where the once rowdy Mulhall (Fishburne) is serving as a pastor. More hesitant than his former partner, Mulhall’s wife pressures him to join the grieving Buddusky, and the three men set off on their journey.

As an avid fan of The Last Detail, I was rather surprised when I realized that I spent the entirety of Last Flag Flying without thinking about the original film. Linklater has used The Last Detail as a jumping off point for his characters, a way to set the plot in motion quickly while leaving viewers the option of backstory. Seeing Ashby’s film is in no way necessary for the enjoyment of Linklater’s.

Steve Carell has been turning out a series of wonderful performances since he decided to broaden his skills as a dramatic actor and continues to do so here. His Buddusky is quiet and restrained, unlike Nicholson’s immature and brash young man. Carell’s Buddusky is one that has lived, fell in love, lost that love, raised a son, and lost that son. He wears that experience and pain in each quiet moment of the film, in each glance, and in each sentence. Cranston, also made famous through comedy, has so perfectly honed his dramatic craft that his performance appears effortless. Fishburne, on the other hand, hasn’t had a great role in a few years, so his skilled appearance here is welcome.

The collaborative result of these three powerful performances and Linklater’s careful direction is a quiet film of deep compassion. These three characters feel fully lived in making their journey’s accessible, despite their rare hardships and experiences. Though certainly a smaller film than his previous few efforts, Linklater continues to be at the top of his game.

Review: Blue is the Warmest Color