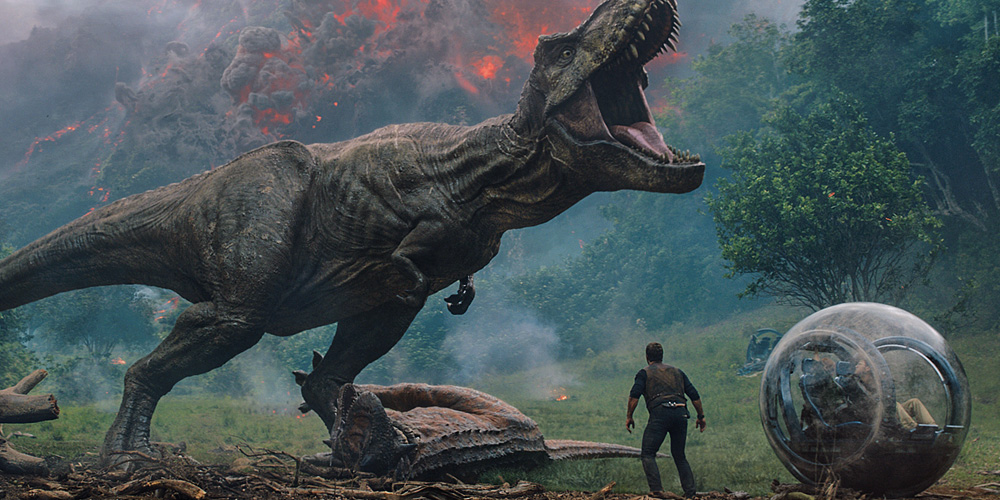 Its the Jurassic franchise that has fallen in this underwhelming and lackluster 5th entry into the series.

This weekend marks the 5th time we’ve cinematically entered the world where dinosaurs and humans coexist with Jurassic World: Fallen Kingdom opening in theaters across North America. After already raking in over 400 million dollars in the international market before this weekend, Fallen Kingdom looks poised to have one of the biggest opening weekends domestically of the year, but will repeat business and film quality be enough to drive it to the top of the summer box office with audiences flocking for multiple viewings?

Its been 3 years since the events of Jurassic World, both in the cinematic universe and real life, and Claire Dearing (Bryce Dallas Howard) has gone from head of Jurassic World to the head of a dinosaur rights activist group. As Isla Nublar looks to be ravaged and destroyed by a newly active volcano, Claire is recruited by Eli Mills (Rafe Spall), advocate for John Hammond’s (played in previous films by Sir Richard Attenborough) previously unmentioned business partner Benjamin Lockwood (James Cromwell) to relocate the doomed dinosaurs. But Mills really needs former Raptor trainer Owen Grady (Chris Pratt) so he can lure the only surviving Raptor, Blue, from hiding long enough to tranquilize it. Bringing along Clair’s charges in the dinosaur activist group, Franklin Webb (Justice Smith) and Zia Rodriguez (Daniella Pineda), the group lands on the island to find Blue, but soon discovers things are not as they appear. Back home, Lockwood’s granddaughter Maisie (Isabella Sermon) over hears a conversation that starts to unravel the real intentions of the mission.

The thrill and excitement from the straightforward yet original and believable 1993 series opener Jurassic Park is far from gone in this underwhelming and at points utterly preposterous entry into the series. Any goodwill garnered from the very successful original Jurassic World is lost as the film doubles down on the gene splicing/experimenting that was introduced in the last film with very diminished results. The film also, to borrow an old TV term, jumps the Mosasaur (aka- the prehistoric shark) when introducing a new clone into the mix, that I will not spoil here, that also plays into the film’s Planet of the Apes style ending. It’s a decision that rings so false it feels as though its from another film all together.  Even the CGI effects are lackluster at times, with parts like a Blue’s escape from an exploding room looking amateurish at best.

The script must take the biggest brunt of the blowback here, as the excitement of just seeing these dinosaurs on the big screen still carries some weight behind it, but the story here is lacking. I have no evidence to support this claim, but it will not come as a surprised if a news report comes out in the future outlining excessive studio interference with director J.A. Bayona’s vision for the film. He’s proven in previous efforts to be a talented and visual director, but Fallen Kingdom seems to be preoccupied with staging predesigned shots and making these “poster moments” happen whether they fit into the story or not. In fact, a lot of the arresting images from the trailer, the T-Rex vs a Lion and the surfers with the Mosasaur, are just tacked on for visual impact at the very end of the film.

Fortunately, the chemistry between Pratt and Howard is still strong, even if their engagement seems less in this entry, or else the film would likely fall apart. Pineda does a lot with a very 2 dimensional, almost throwaway character, which led me to noticeably miss her when she was not on screen. And despite her character having a final reveal/story arc that is staggering in its ineptitude, Sermon is utterly charming as Maisie. Spall sadly plays too middle of the road with Mills, not over the top enough to be campy or menacing enough to be a real threat. While actors like Justice Smith, James Cromwell, Geraldine Chaplin, Toby Jones, Ted Levine and BD Wong are wasted in one note, underdeveloped afterthought characters. Jeff Goldblum returns for what equates to less than a day’s work and less than 5 minutes of screen time as Dr Ian Malcom from the first 2 films.

There’s more I could delve into, like Mills inexplicable reason for even experimenting with the dinosaurs in the first place when as guardian of the ailing Lockwood’s estate he stands to make millions upon his passing or the ridiculous way people keep arriving just in time to save the day even though they are in a mansion that is hundreds of thousands feet large and they have never been in (and yes this happens multiple times), but I digress. The need to ‘build’ bigger threats for the final dinosaur battles is a folly that the filmmakers have invested to heavily in with the underwhelming Indoraptor. Even the much maligned, though a recent re-watch shows it holds up way better than expected, Jurassic Park III chose a real dinosaur that was bigger than the T-Rex as its main adversary, instead of just pulling a name out of a hat and making it fit. And as a story, Jurassic Park III makes way more sense.

Review: On The Road