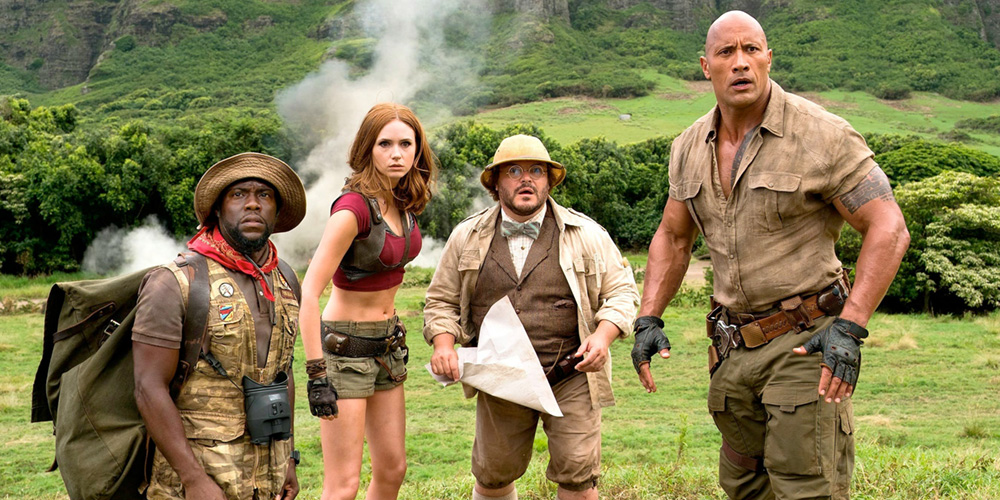 Depending on your perspective, Jumanji: Welcome to the Jungle could be an inspiring idea or another nail in the coffin of Hollywood’s creative integrity. The original film, now over two decades old, may have been a financial success, but it hasn’t really made a lasting impact in people’s minds; it’s less of a childhood classic and more of a Thing That Happened, so its continuation can feel like a studio running out of properties to drag into the present day. On the other hand: Jumanji was pretty fun (or at least it was when I was seven). The concept of a board game coming to life and turning a New Hampshire town into a jungle had a lot of entertainment value, so it might not be a bad idea to go back to that well. Some people might see the trailers or posters for Welcome to the Jungle and ask themselves “Why?” although there’s just about as much reason to ask “Why not?”

But 22 years is a long time between movies, and some credit has to be given to the way this sequel acknowledges its predecessor before tossing it aside. After opening with a reference to Jumanji’s final shot, a metalhead teenager gets his hands on the game in 1996, only to ignore it so he can keep playing on his PlayStation. Later that night, he wakes up to find the board game has turned itself into a console and game cartridge. Just as the game illogically wills itself into a more relevant temptation so it can be played, Jumanji finds its own unexplainable way of adapting itself to the present day so its producers can get paid.

That same middle-finger attitude to internal logic remains throughout Welcome to the Jungle, which finds four teenagers stumbling upon the video game in the school basement during detention. Spencer (Alex Wolff) is the awkward nerd, Fridge (Ser’Darius Blain) is the jock, Bethany (Madison Iseman) is the vain, popular girl, and Martha (Morgan Turner) is the awkward female nerd. All four get sucked into the game’s jungle environment where they embody their avatars and provide a body swap twist to the original film’s premise: Spencer becomes the strong and heroic Xander Bravestone (Dwayne Johnson), Fridge turns into the short and weak Franklin Finbar (Kevin Hart), Bethany transforms into the brainy and stout middle-aged man Sheldon Oberon (Jack Black), and Martha is now the badass “hot chick” Ruby Roundstone (Karen Gillan). Each of them have three lives along with a series of strengths and weaknesses, and the only way back home is for all four to work together and beat the game.

Once the characters start playing the game, Welcome to the Jungle doesn’t really do much more than rely on the charms of its cast to get by. There are some self-aware jokes at the start where the four teens get caught off-guard by the game’s use of cutscenes and non-playable characters, but this idea vanishes by the halfway point (entire scenes play out with in-game characters with no self-awareness whatsoever). There’s a narrative involving Bobby Cannavale as a bad guy wanting a crystal to gain magic powers, but it’s so underdeveloped it’s hard to remember who Cannavale’s character is the moment he’s not on-screen (he also keeps his magic powers after he loses the crystal, so it’s hard to imagine why he even wants it back). Director Jake Kasdan makes an action/adventure by rote, more or less, with every script and story element functioning as guardrails to let Johnson, Hart, Black, and Gillan get easy laughs.

Luckily, all four do a decent job elevating the material to make their roles feel like they’re not just one-note. Johnson and Hart lean into the same jokes about their different physicalities, Black throws around terms like “Yasss queen” and “I can’t even” to get easy laughs, and Gillan seems to be the only person who remembers they’re playing a teenager, giving the film’s best performance (just not its most entertaining one). But as hard as they might try, Welcome to the Jungle doesn’t rise above its own routine, and while its body swap aspect gives the film a strong thematic core about independence and self-confidence, the story’s predictability and lack of stakes work against it. If anything, Welcome to the Jungle is impressive in how it manages to avoid disaster. A reboot/continuation of a 22-year-old film that no one was really asking for could have ended up a lot worse than this, and in this current landscape of studio misfires, a film this consistently passable is kind of a small achievement.