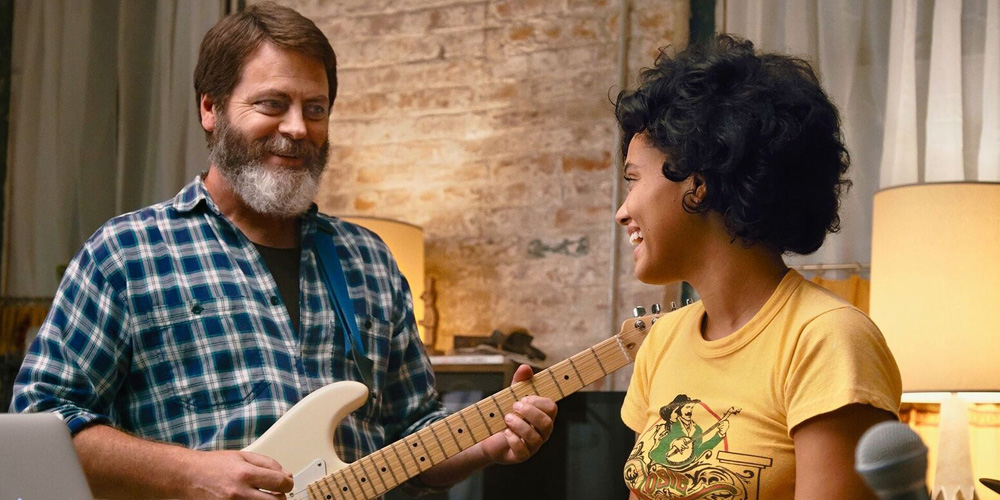 What this film has in heart, it lacks in brains.

Hearts Beat Loud follows a father daughter duo who bond over making music in the time running up to the father’s, Frank played by Nick Offerman, record store closing down. It is also the weeks before his daughter, Sam played by Kiersey Clemons, is about to leave for med school. It has the cast of an excellent film, the performances of a good film, the appearance of a typical indie film, and the script of a bad cliché film. What the film has in heart, it lacks in brains.

The biggest problem of the film is its writing. It is filled with cliché dialogue and overused indie movie moments, and generally lacks in authenticity or originality. The story itself is also lacking. There is not much conflict throughout the film; he has accepted that his record shop is failing and is at peace with it, their band instantly gets recognition and attention from a label without struggle, and the daughter and her girlfriend are in a stable relationship.

There are also inconsistencies in the writing. The first scene sets up Frank to be an asshole and a bad store owner and then he spends the rest of the film being a nice guy and a hard worker. The subplots and minor characters also seem like poor writing choices – many of them seem to be there to bulk out the film. Almost any interaction with Frank’s bartender friend, played by Ted Danson, can be removed without the film losing plot. His purpose in the film is unclear until (spoiler alert) he conveniently gives Frank a job at his bar at the end.

The only good writing comes in the songs. The music in the film is catchy, indie pop. And the singing by Kiersey Clemmons (and some by Nick Offerman) is great. Although, the titular song is somewhat overplayed during the films course. It makes you wonder, what came first: the song or the screenplay?

The highlight of the film is its brilliant cast who all deliver their best acting. The stand out performances come from the leads Nick Offerman and Kiersey Clemmons, but Toni Collete’s supporting role is also worthy of a mention. The actors all manage to give the character and script some life, and find its heart among all the clichés and clumsiness. This should give co-writer and director Brett Haley some credit, and maybe points to a career that should be in directing over writing.

Overall, do not go in with high hopes and you will not be disappointed. If you are in the mood for an easy-watching, typical indie than it should be enjoyable enough.

Review: A Glimpse Inside the Mind of Charles Swan III