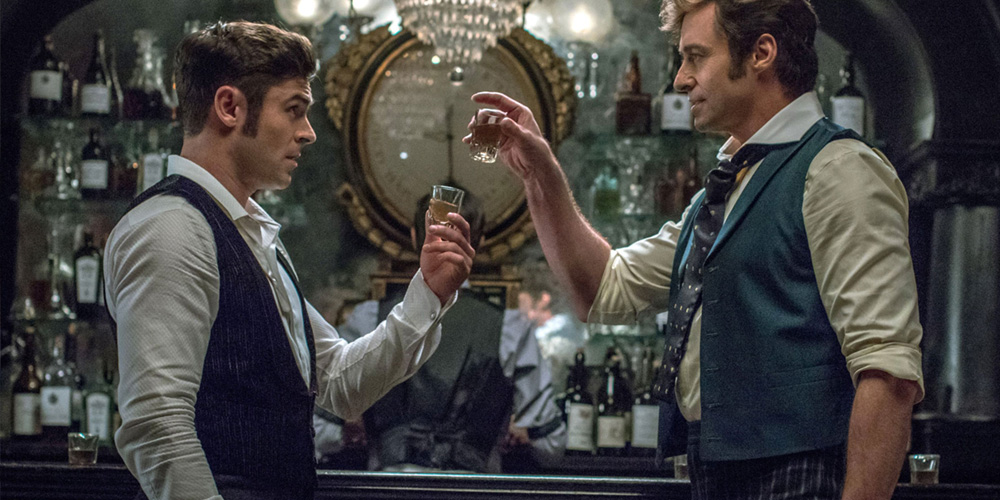 One would think that glorifying P. T. Barnum as a good, kind man would be unnecessary, for with his legendary career of exploitation and general lack of current interest, there should be no market for it. Known for his viciously unrelenting skill in advertising, his “museum” (and then circus) was famous for its freak shows, where physical difference (from disabilities to race to hoax monstrosities) could be gaped at and mocked. At a safe distance, anyone with a ticket could come see the show, one where Barnum could make use of often vulnerable, marginalized peoples for his financial gain. Taking this history, The Greatest Showman does little to change the story — other than expecting us to view it all in a positive light.

Hugh Jackman stars as Barnum, a poor tailor’s son who rises to fame and fortune with his freakshow. But he is a good man. He loves his wife and children, he loves the extended family he creates with his circus, and he loves the audience who leaves his shows smiling brighter than ever before. And that circus is a locus of love and joy: a theatrical critic who hounds Barnum for his lack of artistry finally concedes that in bringing together diverse people, the circus is a celebration of humanity.

The utter cognitive dissonance of The Greatest Showman is that we watch Barnum parade about his freaks (something he exaggerates, making them even more foreign in an already restrictive and ignorant culture), profiting off of them while himself maintaining the normalcy his health, body, and race afford him. Yet ignoring his actions, which seem only possible to be read as (at best) objectifying people already targeted by society for his own gain, the film presents the narrative as that of a genuinely good man.

This ruins the narrative. When Barnum’s pursuit of success and money make him selfish and neglectful, the shock of his character development is impotent for he has always been dangerously selfish in his project. And while the musical as a whole is never bad, aided by strong performances by Jackman and co-stars Zac Efron and Keala Settle, the over-all effect feels out of date, like a sad attempt at a Bollywood film from ten years ago. With the question of “who was asking for a revisionist history of P. T. Barnum, at all?” hovering conspicuously over the severely lacking musical, it’s almost tempting to describe The Greatest Showman as a masterpiece of surrealism, in it’s off-base aesthetics and absurdist drama. Unfortunately, it is more likely just bad.