The interesting part of a parody is that to work correctly, it needs to be parodying something in order to make a statement.

Fifty Shades of Black, the latest attempt at the genre, attempts to skewer last year’s runaway success of Fifty Shades of Grey (the movie). Yet the film seems like a shot by shot remake, and that rather than parodying the film, Wayans and his merry band of co-collaborators (Rick Alvarez and Michael Tiddes) do not add much to original movie, (sample joke: “I’m fifty-one shades of fucked up” parodying the original’s “I’m fifty shades of fucked up”, well, that is an extra shade).

The film essentially retells the story of Fifty Shades of Grey with Hannah Steele and Christian Black (Kali Hawk and Wayans), but with a slight difference, they’re both race swapped from white into black, (this the pun of the title). While this change does open up some amusing sequences, (and there are some challenging scenes at the start of the film, yes, really!) once the film decides to veer off the course and come up with “parodies” of similarly topical and recent mainstream releases Whiplash and Magic Mike, and, ummm, Zero Dark Thirty, which is not so topical and recent, the film feels more like a rehash than a parody. In short, the jokes emerge from strict imitation, rather than taking high culture and lowering it, (Magic Mike seems to be something of a winking see-parody already) or vice versa.

In fact, the closest the film comes to skewering Fifty Shades of Grey is a scene in which Christian is trying his best to engage in a little S & M with Hannah, in which she is screaming in agony and the camera pulls back for the big reveal, and this is that he is reading to her from the E.L. James book of Fifty Shades of Grey along with its particularly purple prose. This kind of dissection would have been welcome on the celluloid version of Fifty Shades, which isn’t exactly high culture itself, but certainly is ripe for a parody, (or perhaps a commentary on why such a tepid film was so successful). Instead, we get the usual “sex is funny and gross” jokes that seem to miss the point of the popularity and success of both the book and movie.

And yet, despite all of this, Hawk is something of a revelation, and the film is sure to elicit a reaction, (at our screening, a combined press and public affair, there were some pretty wild reactions, as well as a pair that dissected every punchline aloud). And what’s more, the mainly black cast, (the less said about Jane Seymour as Christian’s mother, the better), succeeds at presenting something different from what is seen in approximately 95% percent of mainstream studio films, including Fifty Shades of Grey: status quo.

Is it that necessary to pick on a film that shows its main character go from nothing to something? Christian Grey seemed perfect from birth and features no more than a single shade: that being beige. 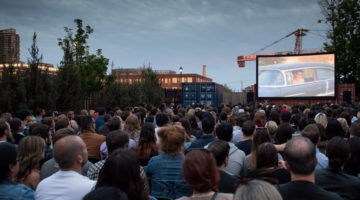