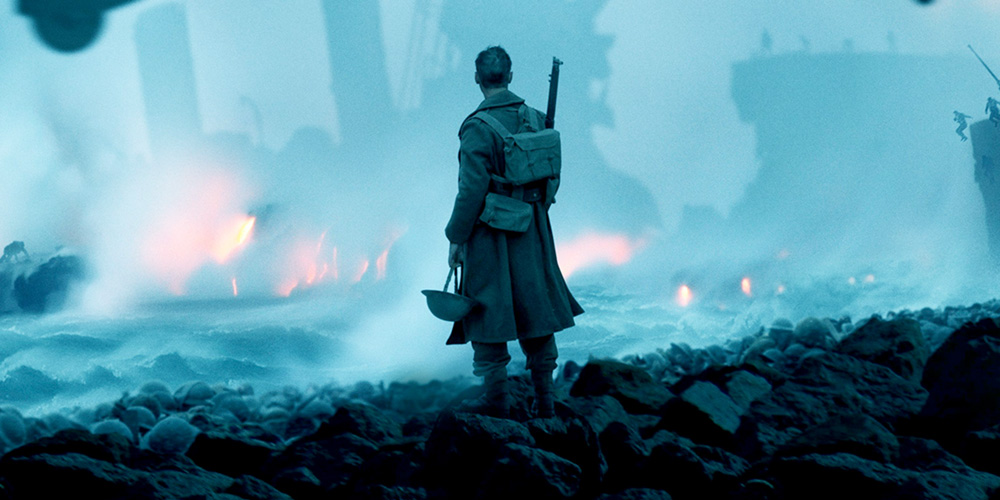 Dunkirk, Christopher Nolen’s latest, is the blockbuster auteur’s retelling of the Dunkirk evacuation of about 300,000 stranded soldiers in the spring of 1940. With nowhere to go, soldiers were sitting ducks for German forces, who had air access to the beach and were steadily encroaching by land, giving the already dire situation a heightened level of urgency. Not a traditional war film, Dunkirk and Nolan, who also wrote the script, are more concerned with survival in an excruciating reality.

The story cuts between three perspectives (land, air, and sea), all told from mostly different places and distinctly different times. The harrowing waiting game on the beach is told over a week, while the events at sea take place over a day and the air scenes span only an hour. As soldiers wait helplessly on the beach, just 26 miles across the English Channel, a successful evacuation depends on the efforts of those in all three timelines. Could Nolan really be expected to make a film under two hours and tell it with a straight-forward, linear timeline?

This is a huge film in every sense of the word but Nolan strikes a perfect balance between the vastness of war and the emotional experiences shared by the soldiers within it. The broader context of the war isn’t mentioned – after all, the soldiers already know why they’re there and who they’re fighting– and the characters themselves are given no back-story. This brilliant decision by Nolan contributes to the immersive power of the story and also sends a clear message: survival is all that matters.

The scale of Dunkirk is impressive and the use of both space and negative space makes for staggering imagery. The cast, including Tom Hardy, Cillian Murphy, Mark Rylance, and Fionn Whitehead, are excellent and each makes a lasting impression with minimal dialogue. What is perhaps most pleasing about Dunkirk is that Nolan has found a way to combine the vastness of his recent efforts, like Interstellar and Inception, with the intimate elements and smaller moments found in his earlier films.

Some will view Dunkirk is an almost great movie held back by Nolan’s worst tendencies, but the restlessness of the film and the manipulation of time, although sometimes disorientating, are put to exceptional, precise use here. Even if Nolan is more in love with his narrative tricks than he should be, it still works, especially considering the relationship between trauma and perception of time. Overreliance on the Hans Zimmer score, a common criticism of Nolan in recent years, will surely be another issue hotly debated. However, despite a few moments where the sounds of war would have sufficed, the score and sound design more generally, are enormously effective.

At a lean 106 minutes, Dunkirk is a tight and tense re-telling of one of the most disastrous military failures in history. The usual war movie clichés are nowhere to be found. There are no meetings, war rooms, or rousing speeches and the dialogue is sparse. The exposition, surprisingly for a Nolan film, is nearly non-existent. The ambition however, is fully present, along with an emotional depth that might make Dunkirk the best film of the esteemed director’s career.

Review: Fantastic Beasts and Where to Find Them