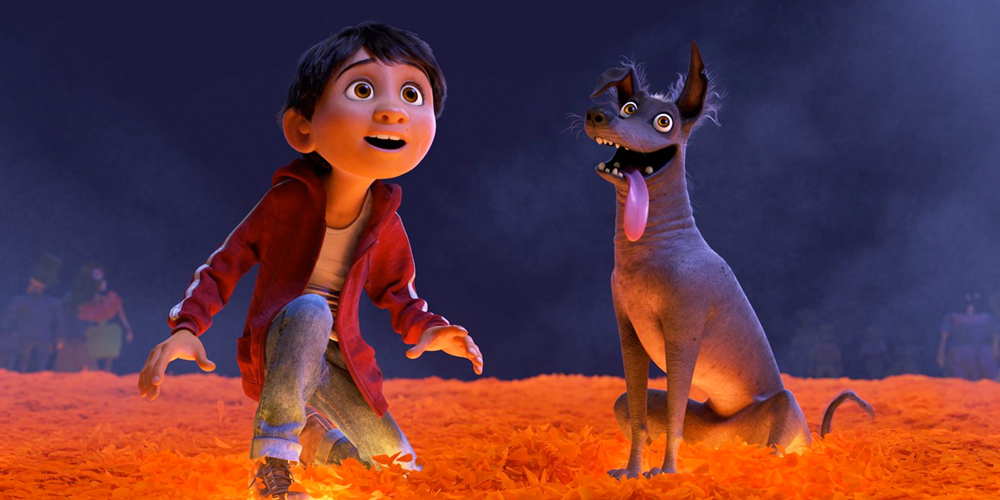 Coco could be described as Footloose meets Spirited Away: the film focuses on pre-teen musician Miguel, whose family has banned all forms of music after their great great grandfather, a musician, walked out on them. When Miguel accidentally ends up in the Land of the Dead on Día de los Muertos, he runs away from his family and attempts to find Ernesto De La Cruz, the world’s greatest musician, and potentially that very great great grandfather, in hopes of finding someone to support his ambitions. With the help of a fading skeleton named Hector (Gael García Bernal) and a hairless dog named Dante, Miguel evades his family and makes his trek through the Land of the Dead.

A jaunty adventure with a large cast of characters, Coco is very engaging. Miguel is a good emotional center, despite his annoying irrationality and tantrums, which are made up for by his earnestness. Hector makes for a charming guide, compensating for the void that is Dante — evidently attempting to add in the typical Disney animal companion, Dante has the personality, likeability, and texture of an over-boiled sausage.

While Miguel’s family can be frustrating in their strict music-ban (a plot where all problems could have been solved by some good, honest communication… like most problems in the film), they effectively are capable of driving the plot. But the issue is that so much of the film feels like it is in place to effectively drive the plot. Little feels organic or pure, the film opting instead for contrived conflicts, and easy formula. Some songs are catchy, while others feel like Frozen rejects, and the major twist ending can be predicted within the film’s first act. Everything is tenuous: even the core messages about maintaining a devotion to family while following one’s dreams only make sense within the film’s web of narrative, constructed in order to make family and dreams come together. One can’t help thinking that if perhaps one or two things went wrong, Coco could have been proof that family and dreams are truly incompatible.

Nevertheless, Coco is beautifully animated; a cute story which at times is quite moving. It may be a rather forgettable Pixar product, but in the moment, it has its charm.

Movie Review: House at the End of the Street

Review: (Dis)Honesty: The Truth About Lies