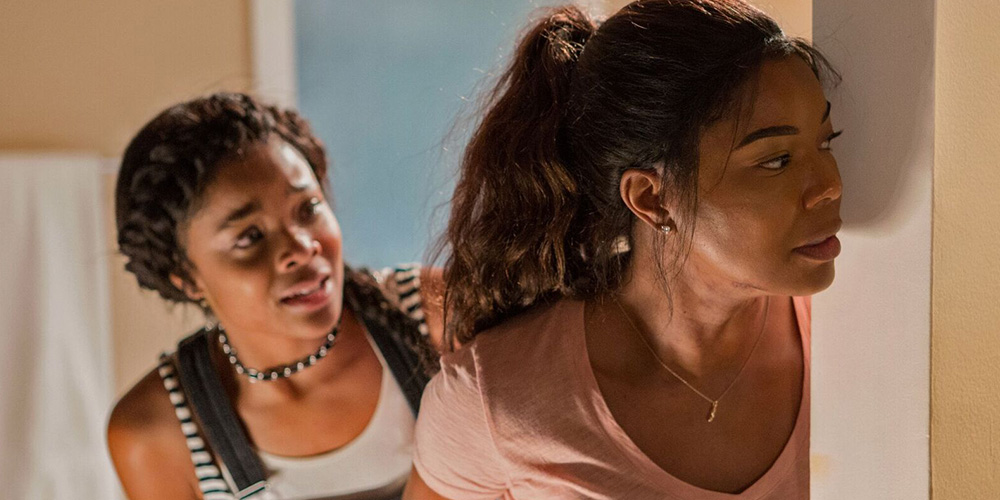 After the death of her exceedingly wealthy father, Shaun Russell (Gabrielle Union) takes her kids up to his country home to prepare the estate for sale. The mansion is as remote as it is secure: practically a house-size panic room, it features brand new surveillance cameras, drones, automatic locks, and bulletproof windows. By a stroke of bad luck, a group of four thieves have broken in to steal a mass of cash the grandfather had locked away. By further bad luck, Shaun gets locked out when the house goes into lockdown, with the children held hostage by the varyingly unhinged criminals. Using her exceptional capability and skill, Shaun must do everything she can to save her family.

Breaking In is a delightfully tight film, with no space for questions. Sometimes it doesn’t make sense. Shaun is shockingly good at both getting in and out of the fortress, managing to single-handedly fight off four men who continuously under-estimate her. But while there is no reason for Shaun’s strength and perseverance (other than her maternal instincts driving her), the film never feels lacking for its potential illogic. Maybe Shaun has a background in home invasion and self-defence, maybe she was trained as a spy; we’ll never know, and it doesn’t matter, It’s just too satisfying to watch Gabrielle Union succeed to care how it happens.

Mixing and subverting narrative tropes — the break in, the break out, and who terrorizes whom in the semi-slasher story — Breaking In is tense and thrilling, creating a good deal of suspense as well as gratification. The slimy, evil criminals, parodies of themselves in their exaggerated actions, are taken out one by one by Shaun, and each time it’s a victory for the audience as well as her. When she manages to protect, and save, her children, we feel the same relief and admiration at her capabilities. Despite its ability to be 90 minutes of mindless, yet enjoyable, entertainment, Breaking In is a film that feeds the soul. We can all feel a bit better about life knowing the Russell family is safe in Shaun’s hands.