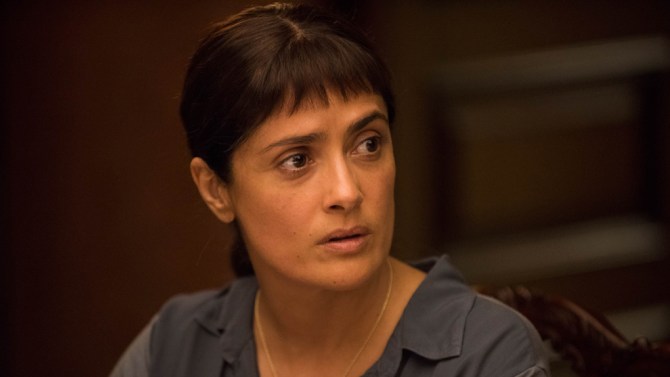 A well-acted, but under-developed political comedy

When her car breaks down at a rich client’s home, health practitioner Beatriz (Salma Hayek) is reluctantly invited to stay for dinner in Miguel Arteta’s newest film.  A Mexican immigrant, Beatriz is at odds with her wealthy white hosts and their elitist attitudes.  Despite her innate goodness, Beatriz turns increasingly to anger, aggression, and thoughts of revenge when confronted with ill-mannered hotel magnate Doug Strutt (John Lithgow).

Beatriz at Dinner is earnest in its critical stance.  Yet while attempting to tackle issues of race and class in America today, its politics are shaky.  The film turns to melodrama in its heightened look at “issues,” which are never fully fleshed out.  Wanting to cover every problem possible, the range is too broad and unfocused.  Characters lack depth, and feel like straw-men set up for Beatriz to battle.  Though Lithgow gives an engaging performance, his character is a villainous caricature.  With an evil ranging from exploiting workers to animal cruelty, the cartoonish bad guy eventually undermines the political gravity of the film.

Arteta, collaborating with writer Mike White, has made a film that feels necessary — and that feels like it knows it’s necessary.  Coasting on social consciousness without nuance, it never hits its mark.  Where the films wants to be openly and bluntly discussing social politics, it simply lacks subtlety.  Where it wants to be accessible, it feels dumbed down.  Where it wants to cover everything, it becomes a mess of exaggerated political incorrectness for us to be appalled at.  And where Arteta and White want Beatriz to be a hero, they reduce her for the first three-quarters of the film to naive goodness.  She is too pure, too kind, and too giving to be human.  While she develops by the end of the film, and though played extremely well by Hayek, her sense of justice is too little, too late to redeem her from two-dimensionality.

Beatriz at Dinner is by no means a bad film.  Hayek’s portrayal of inner strength elevates her character beyond simplicity, and is Lithgow’s brash, campy evil is entertaining.  Arteta and White had a difficult task of sensitively tackling socio-political issues, and do their best.  Ultimately, it seems that every issue involved is too much for one film to handle, and the ideas become shallow and disorganized, despite their urgency.