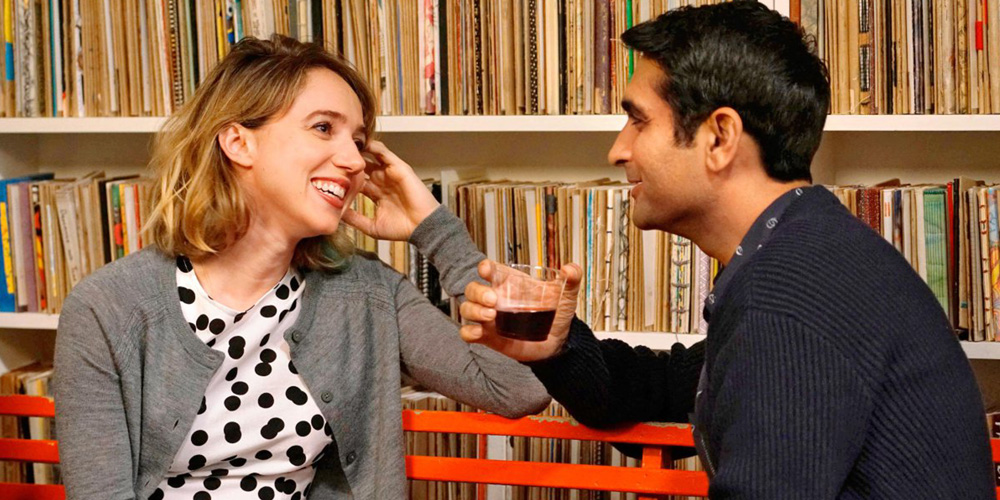 Kumail Nanjiani and Emily V. Gordon, real-life couple and writing team, have been together for 11 years and married for ten. For about half of their marriage, they have been working on The Big Sick, a semi-fictional but mostly true film based on their unconventional love story. Their love is actually quite conventional – different races, religions, and cultures form unions all the time, just not in the movies – but the cultural differences combined with Emily’s medical crisis, and the circumstances by which Kumail builds a relationship with her parents, make their story extraordinary.

Although it does transcend genre, the film is a rom-com at heart, but The Big Sick is begrudgingly political due to the novelty of a brown-skinned lead. However, despite the lack of diversity in Hollywood productions, Kumail and Emily don’t buy into the pressure, or perceived pressure, of telling the story of a Muslim Pakistani-American.

As Emily puts it, “Nobody’s asking Matt Damon that question: do you feel pressure as a white man?”

“I bet he does,” quips Kumail, lead actor and co-writer of the film, as the couple shares a laugh at whether Damon faces similar questions on his storytelling choices. “I think all you can do is portray your experience as accurately as you can and hope that it adds value to the spectrum of diversity,” he adds. “I don’t think diversity means any portrayal has to portray a whole group. No one portrayal can cover the totality of being a Muslim.”

As for a remedy to Hollywood’s not-so-secret diversity problem, Emily (depicted in the film by Zoe Kazan) doesn’t think it’s all that complicated. “What would be amazing is if there’s enough Muslim stories that not any one story has to be representative of an entire group of human beings.”

In addition to telling a relatable, commonplace story with Muslim characters, it was important to Kumail and Emily to write characters with layers, including a complete female perspective. When recalling events from the early moments of their relationship they, like any couple, inevitably remembered some things differently.

“Every time we found in writing this, when we would have a disagreement about how we experienced something from our past, we tried to fold both perspectives into the movie because I think so often, women get sidelined in movies like this. They’re supposed to fold in to what the other person is feeling,” explains Emily. “And we were very adamant that even though this is Kumail’s journey, Emily is a full person and has different perspectives on things.”

For Kumail, giving the characters honest motivations made for a much more complicated dynamic between characters and real-life Emily can take a lot of credit for injecting the film with depth.

“Emily has this superpower that unfortunately is very rare in Hollywood, which is writing female characters who are real and interesting and complicated and funny.” With a fake sense of revelation, he adds, “I was like, they should let more women write and direct movies!”

Interview: The creators of TIFFR discuss their beginnings and improving the festival experience

5 Questions with Sophie Nélisse of The Great Gilly Hopkins

Interview: Jennette McCurdy and Jesse Carere of BETWEEN

Devil May Care: Interview with Deborah Ann Woll of Daredevil

Interview: Director Alan Zweig talks about When Jews Were Funny