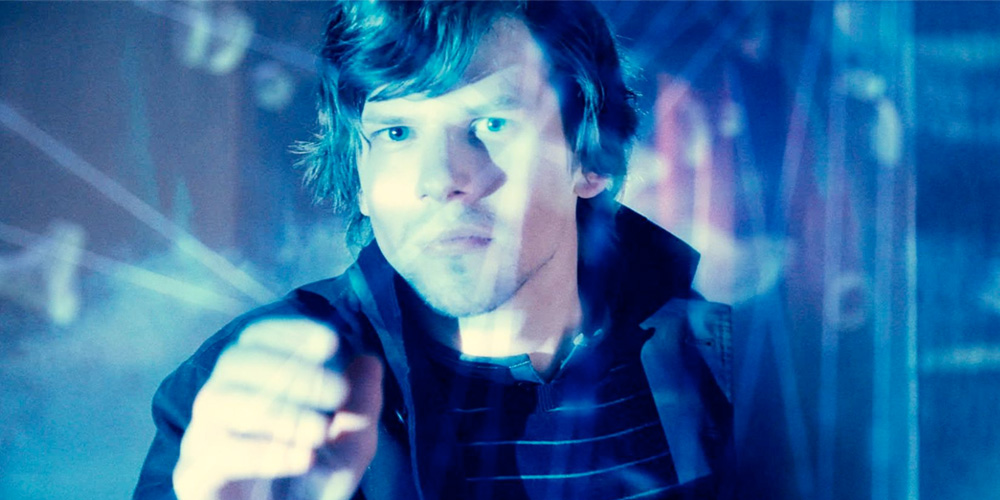 Interview: Jesse Eisenberg talks magic and his upcoming film ‘Now You See Me’

As one of the more original summer blockbusters, Now You See Me, a magical caper filled with quick wit and charming stars, it’s the beginning and the end that look to stand out the most for movie-goers.

Perhaps it’s a movie version of magic’s pledge and prestige, and as exciting as the turn may be, none of it matters if you aren’t sold in the beginning, and satisfied with the finale. In the first moments of the Louis Letterier affair, we see a street magician performing, and if he executes properly, he should hook you.

“The director wanted me to be an intense magician, one who stares at people, makes very intense eye contact,” explained star Jesse Eisenberg on the red carpet for the Toronto premiere. He is the man you first meet, and he is holding a deck of cards. “In the opening scene, I’m doing a magic show for some people on the street corner of Chicago, but I’m also doing a trick for the people of the audience of the movie. As you’re watching the movie, it appears my character is looking at the audience.”

As we watch him perform, along with three other illusionists with whom he will soon join forces to dazzle world audiences and steal from world banks, it’s hard not to give in to both the movie magic, and the magic itself. Eisenberg admitted to getting into his character and embracing the magic; or at least the magic secrets.

“I was really excited to learn how to do things,” said the young actor of Zombieland and The Social Network fame, among others. “I wanted to prepare for my character and become as much of an expert in a small amount of time.” His character is J. Daniel Atlas, the cocky and condescending leader of this wayward magician bunch.

What follows is a lark, as a two agents and a trickster turncoat tail these four apparent thieves and their rich proprietor. While that’s all exciting and apt summer movie fare, the real trick – for a filmmaker, that is – is how does someone deal with the ending of an illusion versus the ending of a movie?

“In a movie you kind of want to feel you went along for a ride and knew where to get off, and in magic you’re a little happier being deceived,” offered Eisenberg. “In this movie there are all these twists and turns and surprises, I think it’s always really fun. I don’t think it feels like deceit.”

This is indeed a caper, however many car chases and explosions are throw in. Thus, reaction to the film will be determined by whether or not audiences want to be left in the dark, and if not, do they approve of what’s behind the curtain.

Interview: John Cusack discusses his character in Maps to the Stars and working with Cronenberg

Interview: 5 Questions with Gina Prince-Bythewood, writer-director of Beyond the Lights

Five questions for Mark Raso, Writer and Director of Copenhagen

Five Questions for Micael Preysler, the co-writer and director of Lily & Kat