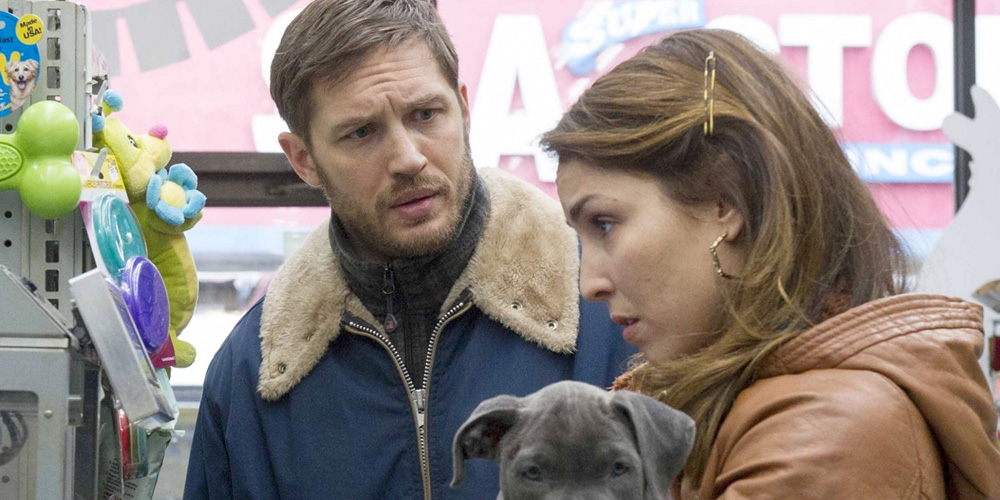 “The dog gets too much attention,” said actor Tom Hardy, laughing as a discussion about his new movie The Drop begins with talk of a pup. Based on the story Animal Rescue by Dennis Lehane, whose novels include Mystic River and Gone Baby Gone, this film by Belgian director Michael Roskam finds Hardy’s soft-spoken Brooklyn bartender Bob Saginowski find new life in both a woman and a dog.

“We’re both extremely passionate about exploring things and try to find the truth in a way, to bring things to life, were both competitive with ourselves,” said Rapace of her and Hardy. She plays Nadia, who, because of this stray puppy that Bob finds on her property, takes an interest in his life. Like Bob, she has a sketchy and influential past, one that includes a determined ex-boyfriend in Schoenaerts. “We both have that obsession in a way; what’s in there, how deep can you dig?”

Bob tends a bar run by James Gandolfini’s Marv, a site that acts as a way station of sorts for criminal exchanges. Bob’s a guilty bystander, and the affairs of the bar threaten his sudden happiness and curiosity just as much as Nadia’s ex-boyfriend does.

“I thought we still really feel that he still loves Nadia more than anything in the world, and that fuels his actions,” explained Schoenaerts of his character Eric Deeds. The Belgian actor’s friend and past collaborator Roskam is making his North American directing debut with The Drop.  “That was the core of his soul, the love he feels for Nadia. Of course it shows in brutal ways, but in the end, it’s still love he feels for that woman.”

“He’s another one of us, a character actor,” said Hardy of Schoeanerts. “He arguably, I’m not from America, but he arguably has the best accent in the film for someone speaking a second language.” Hardy continued in talking about the level of acting that makes up a film where admittedly, the story takes a backseat to the characters and what they’ve done in their life, and what their next defining move will be.

“We’re kindred spirits,” said Hardy. “We genuinely love the craft, love acting, love the work – Matthias, Jimmy –  they do anything to achieve the best for themselves and the team.” Rapace and Hardy especially got along well, finding similar acting styles with one another. They both explained they seek transformation, to immerse themselves in their character.

“Sometimes I wish I could do things a little bit cooler or cold, more technical, just go in and do it and go home,” said Rapace.

While as actors they trust each other, Schoenaerts’ Deeds is an unpredictable, towering presence, a villainous figure that is more than capable of hurting Nadia, Bob, and the puppy. “If that’s the way I get into it, I can’t play it,” he said of Eric and his ability to inflict pain, particularly on a puppy. “I can’t defend that. I don’t identify it, I don’t understand. I have to find a way in, about why does he do it. Then we came back to a different reality,” speaking again about Deeds love, misguided yes, of Nadia.  “That’s something I can understand, want to defend, and have to work with it. I scare the s**t out of people, but it’s never my intention.”

“If I work with people I trust and respect, there is nothing I wouldn’t do,” said Rapace with the utmost sincerity while referring directly to Hardy. “With him, I feel so safe. I feel like we can do any kind of film, we can do any kind of relationship. Even if I do a really bad take, he has my back. He can help me grow.”

“We both enjoy playing leads,” Hardy offered. “Ultimately it comes back to character, transforming as best as possible. Sometimes it doesn’t work, sometimes you get really great result, it’s fulfilling to try.”  Lightening the mood, Hardy continued with his thoughts on that this submission to character transformation is the only way the two can properly work their craft.

“‘We’re never going to be movie stars,” he said, smirking to Rapace. “We’re liars. That’s what we do: we lie professionally.”

A Conversation with Trey Edward Shults and Kelvin Harrison Jr.

Shults and Harrison Jr. dish on their "therapy sessions" that led to creating one of 2019's masterpieces.

Interview: Phyllis Smith talks INSIDE OUT, life changing memories, and her appreciation for Toronto