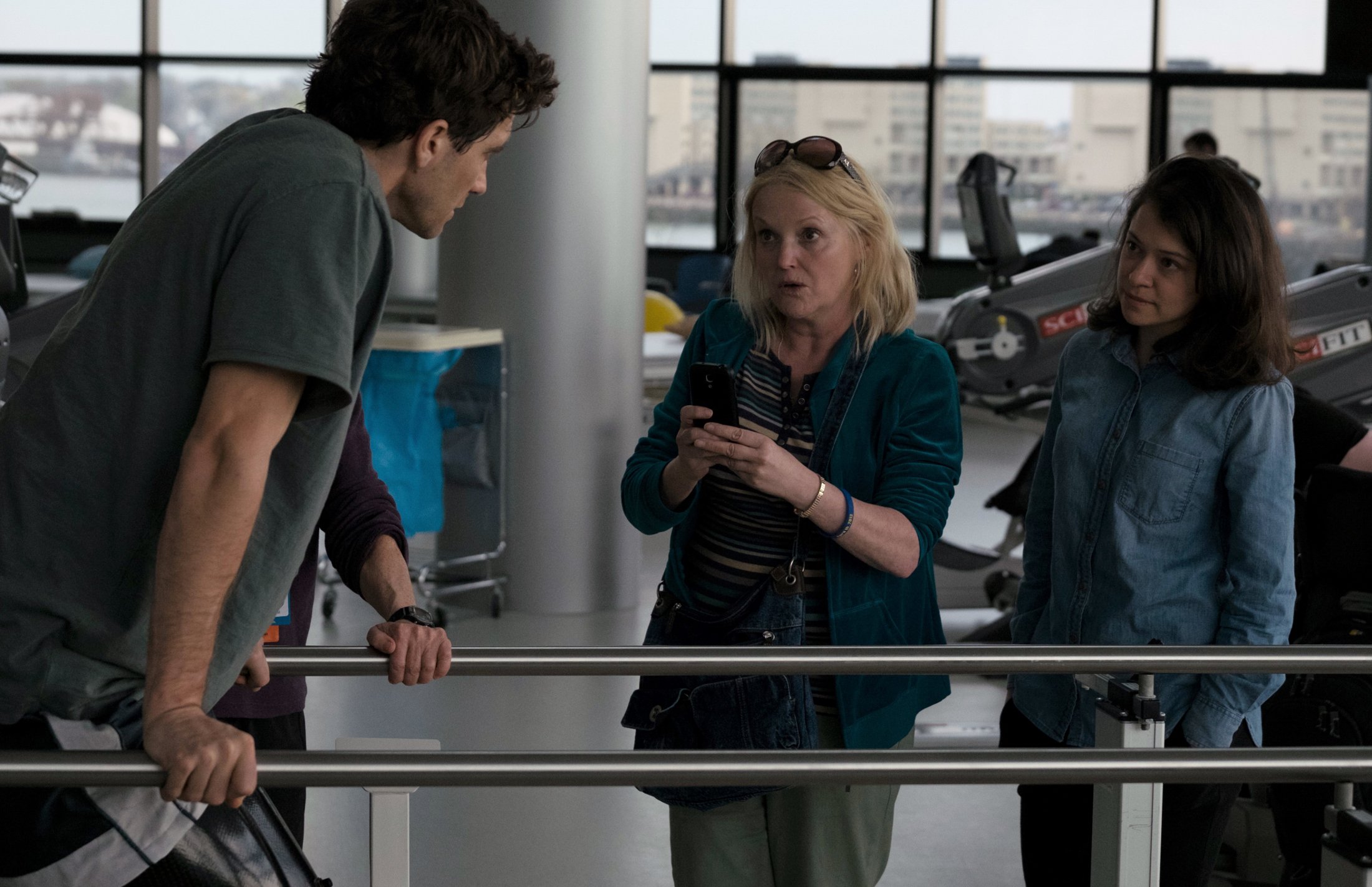 David Gordon Green’s Stronger is one of the year’s most anticipated biopics. The second feature to explore the 2013 Boston Marathon bombings, the film follows Jeff Bauman (Jake Gyllenhaal) who overcame great adversity after losing both of legs in the attack. British actress Miranda Richardson dons the Boston accent to play Jeff’s mother Patty. The two-time academy award nominee brings incredible importance and strength to the supporting character. Following the film’s premiere, we had a delightfully frank conversation with Richardson about her on-screen persona and her beguiling interaction with the real Patty Bauman.

Scene Creek: When you read the script, were you surprised at the importance of the family dynamic?

Miranda Richardson: I think there have been a few detractors who feel that the family has been used to just be funny and brawly. I think it’s better than that. There are choices that have to be made about the trajectory of the film and the emotional journey of the film. I think it’s been done very skillfully and rightly. You get a sense of everybody’s contribution and journey, in the shortest amount of time sometimes. In defense of Patty, I think maybe people don’t understand that she worked, she worked hard. She went out to work to support her boy and we don’t really get to see that. In real life, she heard the news while she was at work. I didn’t want people to feel that she was lazy in any way. I think you understand her journey.

SC: Do you feel an added level of responsibility when you’re playing a real person who is still around?

SC: Did you get to meet Patty before shooting?

MR: First of all, I have to say that going back to John, he has written a script that had an incredible amount of research and there was already trust built with the family. The script has come from a genuine place. So I didn’t feel that we were having to do a lot of manual work to earn the right to do this. I very much wanted to meet Patty whilst knowing that it is the script ultimately that we are dealing with and representing. I had no intention of ever doing an impersonation, but I thought that I wanted to hear her side of things; how she expressed herself about what happened and how she deals with the everyday. I also wanted to hear her vocal rhythms and things like that. No chance. Supposedly it was going to happen. I think she came up to the boil three times and then became unavailable each time, which in itself told me quite a lot about her. She doesn’t want to mess up. It’s about her low self-esteem; it’s about not failing. So she fails, because she doesn’t show. What was interesting to me, something I’m not discovering was that her lack of commitment is mirrored in her son. She covers up all these things. In her case, she covers it up with smoking and drinking. Jeff doesn’t do that, but he doesn’t show up, until he does. I eventually did get to meet her. I really felt for her. She was putting on a great show. She was neat as a pin and her new place that she moved into very recently, neat as a pin. I very quickly realized that she would love to have a cigarette but there was no way she was going to show us that. She palmed one all the time; she had it there in her hand. I know that the moment we left she would be out on her little stoop having a fag. She only offered us water. Not even tea or coffee, it was just, “can I get you some water?” So, of course, we’d said yes. I thought that maybe she has her bottle of wine or whatever she’s drinking somewhere else in the house. I didn’t get this from her but you’d think she was the sort of person who would have a mint just before you arrived because she didn’t want anything on her breath. She answered all our questions very carefully and very thoroughly. I was there with the dialect coach and she let him tape the meeting. So I was able to have her voice in my head after that, but quite a big body of work has already been done. So yes it was interesting and it was still useful, but it wasn’t something that I was pinning my hopes on for the character.

SC: Do you know if she’s seen the film yet?

MR: Oh yes, I do. The only thing she’s upset by is that she said she never smoked in the hospital. That was my cheapest gag, to smoke out of the window. I just thought, “She’s torn, she’s not going to leave her boy who’s just down the corridor. She needs that cigarette.” She’s not going to go downstairs and outside, it’s not going to happen. I thought that was fair game. I’m sorry about that for her but it’s my version of the truth. The family has all been very affected by it and they continue to be affected by it. Reliving the worst day of their lives…it’s a crazy idea. In your own lifetime – it’s always weird being documented like that.

SC: Was that all she said?

MR: As far as I know. I actually haven’t had the conversation with Jeff specifically about her yet. We haven’t really had the opportunity. He’s here now actually. They made a huge noise for him at the premiere. I didn’t meet him until the last day of the shoot. My awareness of what he has to go through is now building. This is the closest we’ve been for the most amount of time. Seeing him deal with stairs, of which there have been so many over these last two days. It wasn’t really thought through. It’s been so incredibly moving. His humor is the way of getting through that. He has a natural sense of humor.

SC: I have to ask about one of my favourite films, The Phantom of the Opera in which you played Madame Giry. It’s criminally underappreciated,

MR: It’s sort of campily wonderful. It was awesome to do. That opening sequence…I get goosebumps just thinking about it. Black and white into colour, it was fantastic. So exciting to see all the little glimpses of the little worlds of backstage. I thought it was sort of glorious really; I loved it. We all got a chance to show off. The attention to deal is really great, astonishing.

An Interview with Anthony Daniels: The Man Behind the Mask

5 Questions with Gregg Turkington of Entertainment

Interview: Dakota Daulby talks about his career and Falling Skies

Interview: Patrick Huard and Suzanne Clément on MY INTERNSHIP IN CANADA

Interview: Kate Linder on The Young and The Restless