Samira’s Goetschel’s powerful film City 40, feels like a document that we the audience should not be viewing. It operates under the cover of darkness and shadows, yet surprisingly does not throw this fact in our faces, including only a few inter-title cards documenting life in this closed city.

While City 40 is the story of the Russian city of Ozyorsk, it is just as much about Nadezhda Kutepova, the activist at the core of its story. But like the film shows us elements that we are clearly not meant to see, there is much more to Kutepova’s story. The end titles reveal that she continues to be interrogated for her cause. It’s suddenly clear that while City 40 shines a light on a town that is devastated by a nuclear event from over fifty years earlier, that there is much more for Kutepova, Goetschel and the audience themselves to explore. We have seen maybe 40 percent of the story of City 40, and long to discover the rest, no matter how dangerous the results. 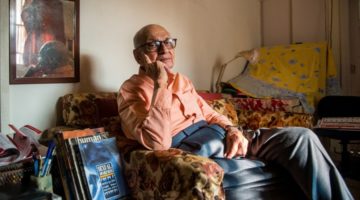