This past weekend in Toronto, Fan Expo celebrated their twenty-fifth anniversary. For his third year in a row, Arrow star Stephen Amell has come to this great city and has certainly not failed us. He talked all about his continuously growing career and mainly answered questions about the great success of Arrow. First off the bat, was clearly an introduction to the panel, and despite it not being the first thing that Stephen did it was one of the highlights. Stephen decided to do the introduction to Arrow in front of a fully packed room 105 including “previously on arrow”.

The panel was fantastic, and some of the highlights were truly amazing. Anyone who is a fan of Arrow will be pleasantly surprised by some of the things Stephen had to say. First things first, Stephen is tired of doing twenty odd episode seasons and would much rather do a seventeen episode season then do a six or seven episode mini series focused on THE SUICIDE SQUAD! I cannot express how amazing that show would be, simply because the Suicide Squad is one of the greatest collection of villains ever.

Secondly, Stephen gave us some insight on this falls hottest newest television show, Flash. He told us that the eight episode of the season would be a highly anticipated one as it will be a crossover episode. Firstly Flash episode 8 will be titled “Flash vs Arrow” and Arrow season 3 episode 8 will be titled “bgjskbfjks” as he cannot reveal the title of the episode yet.

Also we were pleasantly informed that Stephen’s cousin Robbie will be starring as Firestorm in flash, in a hopefully larger role than the one off. As well the third season of Arrow will include a story line with Ra’s Al Ghul!!! Also, on complete speculation no one has been casted as Ra’s as of yet, and Liam Neeson has said he would return to the role in a heartbeat. Here is hoping.

To top of the panel Stephen gave us audio of his beautiful daughter eating meat, proving she is a vegetarian. Lastly, no panel is complete without doing a con-selfie, as Stephen stands on stage, turns around, and takes a selfie with the entire audience.

Dear Friend, See The Perks of Being a Wallflower

The Evolution of Screenings

Who You Know: Trailer and Exclusive Interview

The rom-com starring Dylan Everett, David Hewlett, and more is set to make a splash at film festivals. 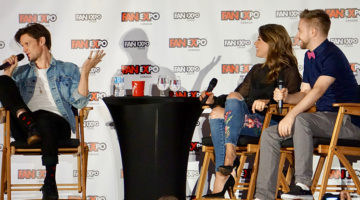 The Doctor is in the building. Matt Smith talks princesses, Marvel, and The Crown on the first day of Canada’s 23rd annual Fan Expo.

Harry Potter and the Goblet of Fire in Concert