One of the reasons that we enjoyed the Jason Krawczyk film He Never Died so much is that is was shot and cast locally. The SXSW premiere features actress Jordan Todosey as Henry Rollins’ character Jack’s daughter Andrea, and Todosey delivers a wise-beyond-her-years performance.

The actress also appeared this year in Portal to Hell!!! Between, Reign and is perhaps most famous for starring in Degrassi: The Next Generation as the transgendered Adam. We spoke with Todosey by phone after the film had its Canadian premiere at Fantasia Fest.

Scene Creek: What was your first role?

Jordan Todosey: I played one of the fireflies, the Girl Scouts, in the movie The Pacifier and that was like the first thing I’d ever done, and after that I got Life With Derek and I was so excited about getting that. You know that the first of Life with Derek was filmed in Newfoundland? I started when I was about nine, and it went until I was about fifteen, sixteen. And then Degrassi was my high school years (Laughs).

Scene Creek: That character was so popular!

Jordan Todosey: It was definitely a controversial character for sure. They wanted to tell a story about texting and driving for a while, and wanted it to have an impact with viewers. I mean, the biggest thing about that is that it is so shocking and…sudden that you know that made it more real that it wasn’t just a day player, or someone they just brought in, that it was a major character. I think that they did a good job with it. Whenever I look at my phone now when I’m driving, I’m like “nope, can’t do this! I’m gonna die”.

Scene Creek: For what kind of roles do you now look?

Jordan Todosey: Anything raw or gritty or challenging, emotional really, I want to be able to tell the story through that. So hopefully I’ll be auditioning for some more films and independent stuff always interests me. I did a full-length feature with a writer and director that had just gotten out of Humber College and that was really inspiring because it was all a young crew. We’d all go out for beers afterwards. I just want to do as much creative work as possible.

Scene Creek: He Never Died seems to fit your desires to a T.

Jordan Todosey: Yeah, it was super fun doing all of the prosthetics and stuff on the film, because I had never done that before, obviously. It was cool getting all done up in the make-up. In some of the scenes, they did my face up. The make-up person was really great. He was showing me how they make the broken nose pieces to put on, all the fake blood was corn starch, it was really cool.

Scene Creek: What did you feel that you brought to the role?

Jordan Todosey: I liked how Andrea brought out some of Jack’s softer side, or at least I thought so, maybe it’s a biased opinion, I thought that I brought out a bit of his fatherly warm side (laughs). There were definitely some dark and gritty locations that we had to go to, I was psyched to be on location, because a lot of the work that I do is always studio stuff, so on-location filming is like “oh yes, something different every day” I loved the diner that we filmed at, that place was just so cool looking. It’s looks great on camera too. Even being with Henry Rollins was so great. What a cool guy with so many interesting stories. I could have conversations with him for days, it was great. He knew what to do and he just did it!

He Never Died opens December 18th at The Royal Cinema in Toronto and is available on iTunes and VOD.

Interview: Orange is the New Black

Interview: Shailene Garnett talks about The Dirties, Krissy B. and Bullying

Devil May Care: Interview with Deborah Ann Woll of Daredevil 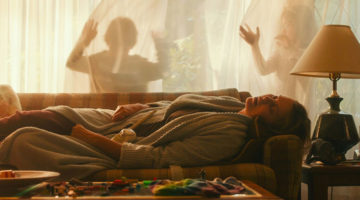